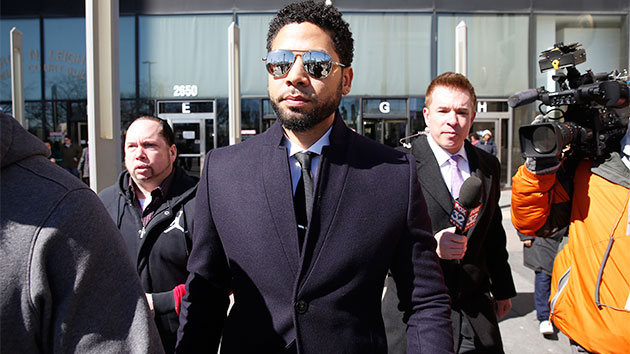 (CHICAGO) —  The two Chicago brothers who claim Jussie Smollett paid them to help stage what police deemed a “hoax” attack filed a defamation lawsuit on Tuesday against the “Empire” actor’s lawyers.

Abimbola and Olabinjo Osundairo filed the lawsuit in U.S. District Court in Chicago accusing Smollett’s attorneys Mark Geragos and Tina Glandian of making false public statements about them during a media blitz that has damaged them both emotionally and economically.

The lawsuit claims Smollett’s lawyers continued to proclaim the actor’s innocence even after prosecutors said he agreed to forfeit his $10,000 bond and do community service in exchange for them dropping 16 felony disorderly conduct counts against him stemming from what a Chicago Police Department investigation determined was a false police report about a January homophobic and racist attack.

The March 26 decision by the office of Cook County State’s Attorney Kim Foxx prompted outrage from police and then-Mayor Rham Emanuel, who called the move “a whitewash of justice.” Foxx and her first assistant, Joe Magats, stressed the decision was not an exoneration of Smollett and expressed confidence that he would have been convicted if the case had gone to trial.

But the actor immediately held a press conference to continue denying the allegations made against him, saying he had been “truthful and consistent on every single level since day one. I would not be my mother’s son if I was he capable of one drop of what I was accused of.”

The Osundairo brothers’ lawsuit claims Geragos and Glandian continue to foster the myth that the attack on Smollett was real and portrayed the brothers as the perpetrators.

“Mr. Smollett’s attorneys, faced with an outraged public, did not retreat after their success. Instead, they doubled down…,” according to the lawsuit.

The lawsuit details a litany of “false” statements made by Geragos and Glandian in media interviews, including ones with ABC, NBC and numerous newspapers. Among the statements the suit characterized as defamatory were that the brothers “criminally battered” Smollett and committed a hate crime against him, that one of the brothers donned “whiteface” on the day of the attack, that the brothers illegally distributed foreign steroids, that they committed perjury in front of the grand jury and that Abimbola Osundairo had engaged in a homosexual relationship with Smollett.

ABC News has reached out to Geragos and Glandian for comment.

Smollett’s defense lawyers not only affirmed their client “was a wholly innocent victim,” but accused the Osundairo brothers of leading “a criminally homophobic, racist, and violent attack against Mr. Smollett.”

Geragos and Glandian, according to the lawsuit, “made these comments knowing they were untrue to distract from Mr. Smollett’s farce and to promote themselves and the Geragos & Geragos Law Firm.”

In a joint statement released by their attorneys at a news conference on Tuesday in Chicago, the brothers, who also go by the names Abel and Ola Osundairo, said they are fed up with the “lies” being told about them by Smollett’s legal team.

“We have sat back and watched lie after lie being fabricated about us in the media only so one big lie can continue to have a life,” the brothers’ statement said. “These lies are destroying our character and reputation in our personal and professional lives.”

“Those who know us personally know hate for anyone is not who we are,” the brothers said. “We try to spread as much love and positivity with whoever we come in contact with. We will no longer sit back and allow these lies to continue. “

Attorneys for the Osundairos said at the news conference that they were taking action in federal court so that those responsible for trashing the brothers’ reputations are held accountable.

“Let me make one thing clear: The Chicagoan brothers told the truth. They could have remained silent,” said Gloria Schmidt, one of the attorneys representing the brothers.

Schmidt said she hopes the lawsuit will also ensure that the “lies and malice” perpetrated on the brothers, the city of Chicago and the Chicago Police Department “are met with truth and healing.”

James Tunick, another attorney for the brothers, described the public remarks by Geragos and Glandian about Abel and Ola Osundairo as “scorched earth lawyering” and added that such tactics “will not play out in the United States District Court in Chicago.”

Smollett told police that on Jan. 29 he was walking to his Chicago apartment about 2 a.m. when two men wearing masks attacked him, screaming homophobic and racist slurs while pouring a liquid on him and putting a noose around his neck. Smollett also told police that the attackers yelled “This is MAGA country!” an apparent reference to President Donald Trump’s campaign slogan, “Make America Great Again.”

As part of the investigation, Chicago police spent hours combing through video surveillance before finding images of two men walking in the general vicinity of the reported attack around the time Sollett said it occurred. Detectives eventually tracked down the Osundairo brothers on Feb. 15.

While being questioned by investigators, the brothers claimed Smollett paid them $3,500 to help orchestrate and stage the crime after he became upset that a letter threatening him, sent Jan. 22 to the Fox studio where the television series “Empire” is filmed, did not get enough attention, police said. Police said they suspect that Smollett was the letter’s author.

Schmidt said the brothers, who testified before the Cook County grand jury that indicted Smollett, knew Smollett from bit parts they performed on “Empire” and because the actor had hired them to get him in top shape for an upcoming music video.

The lawsuit claims that on Jan. 25 Smollett solicited the brothers to help him stage the street attack.

“Mr. Smollett told [the brothers], in private, that he needed a favor from them: they were to help him stage a social media hoax and pretend to attack him,” the lawsuit says. “Mr. Smollett’s motivation was simple. He wanted his employer and the public to notice and appreciate him as a successful Black, openly gay actor. So, Mr. Smollett directed every aspect of the attack, including the location and the noose.”

The suit goes on to say that “Mr. Smollett used his clout as a wealthy actor to influence [the brothers], who were in a subordinate relationship to him and were aspiring to ‘make it’ in Hollywood.”