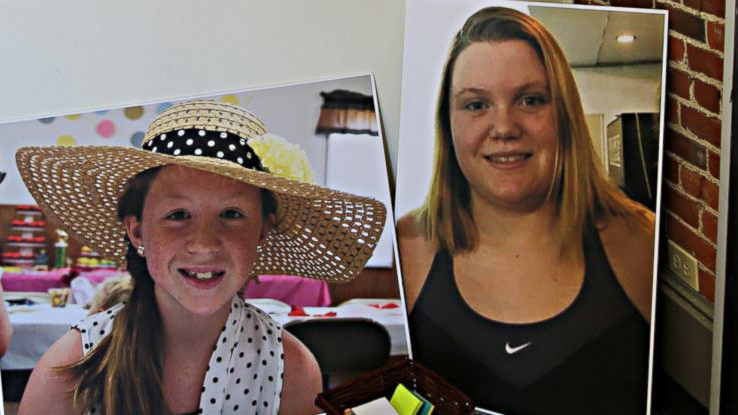 (DELPHI, Ind.) — The unknown suspect in the mysterious murder of two Delphi eighth-graders may live in the small Indiana town, police said Monday, as new information about the killer was released.The male suspect is believed to currently or previously live in Delphi, work in town or visit on a regular basis, Indiana State Police Superintendent Douglas Carter said at a news conference.He’s believed to be between 18 and 40 years old, Carter said, but may appear younger than his age.Carter said the person seen in this image could be the girls’ killer.’We believe you are hiding in plain sight,” Carter said at the news conference, and even “may be in this room.””We likely have interviewed you or someone close to you,” he said.Abby Williams, 13, and Libby German, 14, were enjoying a day off from school on Feb. 13, 2017, when they vanished on a hiking trail near their small town of Delphi.Their bodies were found the next day near the trail. Police have not released details of how the girls died.Over two years after the double murder shocked the small community, Indiana State Police on Monday released that new sketch of the suspect, as well as new audio and video evidence.The never-before-seen video recovered from Libby’s phone shows the suspect walking on the bridge near where the girls were last seen.”When you see the video, watch the person’s mannerisms as they walk,” Carter said Monday. “Do you recognize the mannerisms as being someone you might know?”Authorities in 2017 released a grainy image of someone seen on the trail the day the girls went missing along with a chilling recording found on Libby’s phone with just three words heard: “Down the hill.”On Monday, police released additional portions of the audio recording from Libby’s phone.While it is hard to decipher what is said in the clip, Carter said, “The person talking … is the person on the bridge with the girls… please listen to it very, very carefully.”Carter vowed to find the killer.”You brutally murdered two little girls, two children. Only a coward would do such a thing,” he said.”We will not stop,” he said.Anyone with information is asked to contact [email protected]

In speech at San Francisco “kneel-in,” Jamie Foxx calls on “Hollywood friends” to take action
Trump, Barr tell governors to ‘dominate’ streets in response to unrest
Why some police officers stood with protesters outraged over George Floyd’s death
One Zoom to rule them all: Josh Gad reunites entire ‘Lord of the Rings’ cast in epic “Reunited Apart” segment
Having high blood pressure may make coronavirus more dangerous
Volunteers across the US clean up glass, graffiti in wake of weekend protests