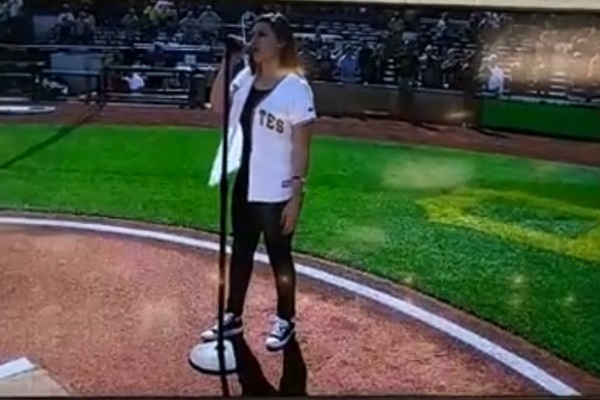 Although the game was eventually cut short due to rain, Dominique sang for the Pirates home game against the San Francisco Giants on Saturday, April 20.

Our own Dominique Martino from Brockway singing the National Anthem at the Pittsburgh Pirates game on April 20, 2019!

Dominique has sung that National Anthem at multiple DuBois Dream games. Most recently, she sang at the DuBois United Way charity game.

She says she’s a little nervous about singing in front of such a large crowd and in front of some of her favorite professional athletes. However, she knows that it’s an important and meaningful job.

Dominique has been practicing  every day ever since the Pirates announced she would be singing about a month ago. She says she sings the National Anthem about three times a day. She doesn’t want to practice much more than that in case she overexerts her voice. Dominique is also taking particular caution to not get sick in the meantime!

Dominique Martino also works as the sales team leader at Sunny 106 and Connect FM (Priority Communications). We’re extremely proud of her! The on-air staff and office members plan on being there at the game to support her this weekend.

The most recent interview with Dominique, on Friday (the day before her big debut in Pittsburgh).

The first interview with her, in March immediately after she got word that she was chosen to sing the National Anthem for the Pittsburgh Pirates.