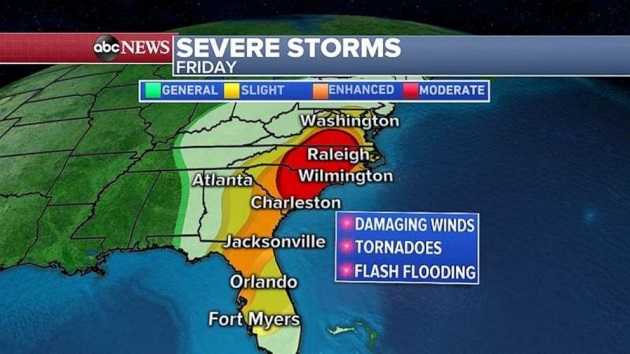 (NEW YORK) — A major storm is moving east, leaving in its wake at least 18 tornadoes and more than 300 damaging storm reports over two days in five states, as the East Coast braces for severe weather.Nine of those tornadoes, reported Thursday, were in Texas, Oklahoma, Kansas and Missouri, as parts of Arkansas saw half a foot of rain and flash flooding. A tornado watch in the region is in effect until 8 a.m. Central time Friday.Severe storms are likely Friday from Pennsylvania to Florida, with the harshest weather visiting Virginia and the Carolinas. Wind gusts in excess of 70 mph are possible, as are tornadoes and flash flooding.Farther north, the same system will deliver heavy rain from Virginia to Maine, which could see more than 3 inches in some areas. Flood watches have been issued in 11 states so far.Washington, Philadelphia and New York City could see significant rain and potential flooding. Parts of Atlanta were without power around 6:30 a.m. Eastern time.