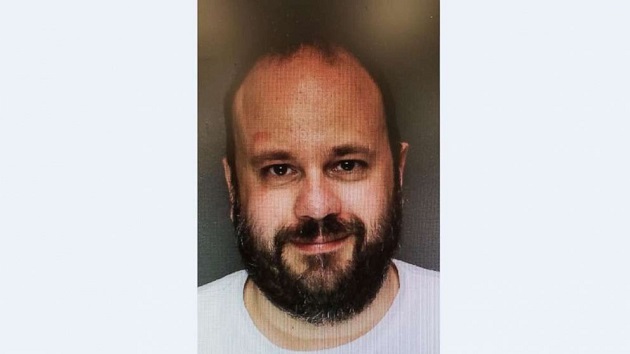 (NEW YORK) — A part-time philosophy professor was charged with attempted arson on Thursday after he entered a historic cathedral with gasoline and lighter fluid, investigators said.Marc Lamparello, a former director of music at a New Jersey Roman Catholic Church, was arrested at the historic St. Patrick’s Cathedral in New York City on Wednesday night after security stopped him with two cans of gasoline, lighter fluid and butane lighters, police said. Sources with the New York City Police Department told ABC News that he also purchased a one-way ticket to Rome, which was scheduled to depart from Newark, New Jersey, on Thursday evening.Lamparello, 37, was charged with attempted arson, reckless endangerment and some violations of city codes. He told police that he was taking a shortcut through church to reach his minivan, which he claimed had run out of gas.”His basic story was that he was cutting through the cathedral to get to Madison Avenue, that his car had run out of gas,” NYPD Deputy Commissioner of Intelligence and Counterterrorism John Miller told reporters at a press conference Wednesday night. “We took a look at the vehicle. It was not out of gas and at that point he was taken into custody.”He was also arrested and charged with resisting arrest, trespassing and disorderly conduct on Monday after he allegedly refused to leave Sacred Heart Cathedral in Newark.Investigators said he was sitting in the cathedral for about an hour and refused to leave when the church was closing. When police officers ordered him to leave, he told them he still wanted to pray. Officers said his intentions weren’t immediately clear, though one police source noted “the timing is odd,” given that it occurred two days after the destructive fire at the iconic Notre Dame Cathedral in Paris. Authorities said Thursday the fire at Notre Dame was likely caused by an electrical short circuit.Miller said additional security had been added in the recent days after the Paris fire.

“This is an indicator of something that would be very suspicious,” he said.Investigators are still working to determine a possible motive, but Miller said he doesn’t appear to be connected to any terrorist groups.Lamparello is a doctoral candidate in philosophy at the City University of New York. He also teaches at several colleges and universities, including Brooklyn College, Seton Hall University and Lehman College, which said it was working to terminate him in light of the charges.”The individual was hired at Lehman College during this academic year and was a part-time online instructor this semester,” Lehman College spokesperson Sarah Ramsey told New York ABC station WABC-TV. “We are taking the appropriate steps to terminate the individual’s employment with the college.”The famous cathedral, which opened its doors nearly 200 years ago, serves as seat of the New York Archdiocese.”I’ve come to trust what we’ve got at St. Patrick’s Cathedral, not that we can ever take it for granted,” Cardinal Timothy Dolan, archbishop of New York, said Thursday. “Last night proves that it works. We’ve got a very well trained interior security staff, we’ve got the constant help of the NYPD, which usually has an officer on the block for ready assistance, we’ve got the ready attention of the FDNY.””Does that mean it’s fail safe? No, but that’s why we come to church to pray for God’s protection,” he added. Copyright © 2019, ABC Radio. All rights reserved.