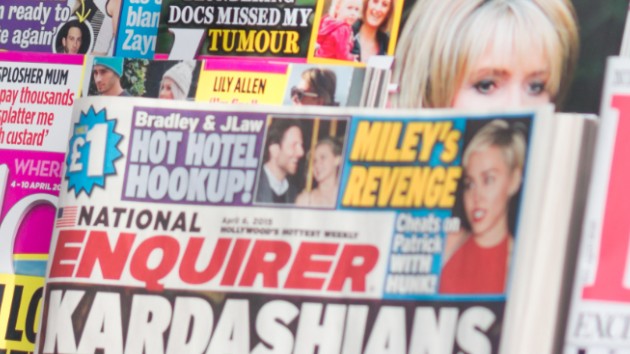 (NEW YORK) — In the wake of scandals surrounded by President Donald Trump and Amazon CEO Jeff Bezos, the National Enquirer has been sold off by American Media Inc.Both the U.S. and U.K. versions of the National Enquirer, known for its often-salacious tabloid fare, as well as the Globe and National Examiner, were purchased by Hudson Media for $100 million on Thursday. “Year after year, the Enquirer has continued to be one of the best-selling and most profitable newsstand titles,” said James Cohen, owner and CEO of Hudson Media, in a release announcing the sale. “But this transaction is about more than a weekly publication, it’s about a brand with extraordinary potential across multiple platforms.”Hudson Media owns over 1,000 shops in airports, commuter terminals and various transportation stations, according to the company.The Enquirer was put up for sale just last week in the wake of scandals involving two of the most powerful men in the world — Trump and Bezos — and current AMI owner David Pecker. Pecker has been a friend of Trump for years.Former Playboy Playmate Karen McDougal signed a $150,000 deal with AMI in August 2016, just months before Trump was elected president, giving the publisher the exclusive rights to her first-hand account of an alleged affair with Trump 10 years earlier. The deal worked as a so-called “catch-and-kill” agreement in which AMI bought the rights with the specific intention not to publish the details.Michael Cohen, at that time Trump’s lawyer and fixer, told Congress in February that Dylan Howard, the executive editor of the Enquirer, coordinated “catch-and-kill” payments with McDougal and porn star Stormy Daniels, who said they had affairs with Trump. Trump has always denied those affairs took place.AMI was granted immunity from the U.S. Attorney’s Office by the Southern District of New York last December as part of a federal investigation into Cohen.More recently, the Enquirer has been mired in an alleged extortion scandal with Bezos. The world’s richest man accused the tabloid of demanding a mea culpa not to publish intimate photos as part of a cover story on his alleged affair with former TV host Lauren Sanchez.Bezos and his wife, MacKenzie, finalized their divorce earlier this month.The deal between Hudson Media and AMI includes a “multi-year service contract” for American Media to continue publishing and distributing the tabloids.AMI continues to work toward paying off substantial debt. The deal would lower what the company owes to $355 million, according to the press release.The sale is still contingent on regulatory approval.