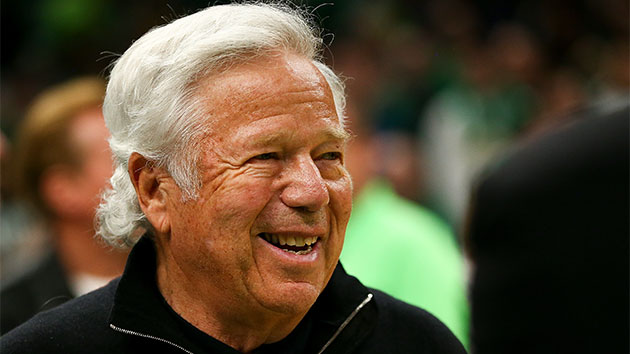 (JUPITER, Fla) — Attorneys for the owner and manager of a Florida day spa, where New England Patriots owner Robert Kraft and other men were allegedly caught on camera receiving sexual favors are claiming either prosecutors or police are trying to profit from the unauthorized sale of the footage “to the highest bidder,” according to newly filed court documents.”I am deeply disturbed that someone in the Palm Beach County attorney’s office or Jupiter Police Department — who are the only ones with access to these video — would attempt to sell and profit from these videos and be in contempt of the courts orders,” attorney Tama Beth Kudman told ABC News on Friday. “It’s disgraceful.”Kudman, who represents Hua Zhang, the owner of Orchids of Asia Day Spa in Jupiter, Florida — charged with multiple counts of running a brothel — in an emergency motion for an order to show cause filed on Thursday evening. The motion seeks to hold officials in criminal contempt and “for violation of this Court’s order prohibiting the release of the video surveillance in this case,” according to filing.”The motion is asking the court to get to the bottom of whoever attempted to sell these videos and hold whoever it is in contempt because they are violating the judge’s order. It’s disgraceful,” Kudman told ABC News.Emails and phone calls from ABC News to the Jupiter Police Department and Palm Beach County State Attorney’s Office requesting comment about the allegations were not immediately returned.Zhang’s business was one of numerous Florida spas targeted as part of a larger human trafficking investigation which installed hidden surveillance cameras in spa massage rooms and allegedly captured Kraft seeking and receiving sexual favors from spa staffers on Jan. 19 and 20. Kraft has denied the charges.The secretly-installed cameras were set up by the Jupiter Police Department during a human trafficking investigation of the spa. While prosecutors with the Palm Beach County State Attorney’s Office have not filed any human trafficking charges related to the Orchids of Asia Day Spa, Kraft and two-dozen other men who had visited the facility were arrested and charged with soliciting prostitution.The latest drama began earlier Wednesday, when Palm Beach County prosecutors indicated that they were preparing to release the potentially embarrassing surveillance video from inside the spa.County officials said that the video would be released in response to public records requests in the cases of Zhang and another women accused of facilitating the alleged prostitution at the Orchids of Asia Day Spa. Officials said they would “pixelate or blur depictions of obscene or pornographic images before releasing such records to the public, absent a court order.”Kraft’s attorneys responded swiftly, filing a letter to the judge to apprise him of what they described as “an extraordinary and alarming development involving what appears to be gross prosecutorial misconduct” and accused law enforcement officials of trying to circumvent the judgment of the court. Kraft’s attorneys had previously filed a motion with the court to suppress the video evidence, and a hearing had been scheduled.”I don’t want this released until I’ve ruled,” Florida Circuit Court Judge Joseph Marx said in an emergency hearing on a conference call with the two parties and the media late Wednesday afternoon.That hearing is now scheduled for April 29 at 1:30 p.m. local time.Defense attorneys for the National Football League (NFL) team owner have said that they intend to argue at that hearing that a search warrant that allowed investigators to install hidden cameras inside the spa’s massage rooms was improperly obtained.Defense attorneys also filed motions on Wednesday requesting to seal the videos not only to “protect Mr. Kraft’s right to a fair trial” but to prevent it’s released to “millions of people around the world to see.””If that were to happen, it would immediately and irretrievably taint the jury pool not just in Palm Beach County, but in neighboring counties (and states) as well. Sealing is the most sensible option,” according to court documents.Under Florida’s Sunshine Law — enacted in 1995 — any records made or received by any public agency in the course of its official business are available for inspection, unless specifically exempted by the Florida Legislature.Yet on Thursday, the New York Daily News first reported that TheBlast.com published an article saying that the newspaper’s reporters, along with “multiple media outlets” were contacted by an unidentified party trying to sell the footage of 77-year-old Kraft with a masseuse.”In a blatant derogation of this Court’s Order, a (presently) unknown individual, or perhaps even a group of individuals, is now attempting to sell, to the highest bidder, the materials subject to this Court’s order,” wrote Kudman in the motion along with Kathleen S. Phang, who represents the spa’s manager, Lei Wang. “Obviously, this information creates yet another emergency necessitating immediate judicial intervention.”

Kudman and Phang are further requesting the judge to have the police and prosecutors pay for their fees and costs for prosecuting their motion.