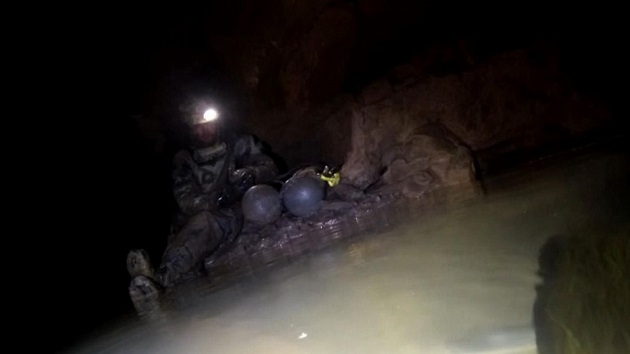 (NEW YORK) — Exclusive video obtained by ABC News goes inside a murky, underwater cave in Tennessee during the daring rescue of a highly trained British diver who went missing while exploring.Josh Bratchley, a member of the elite international team that helped save 12 boys and their soccer coach from a flooded cave in Thailand last summer, was rescued from the cave near Nashville on Wednesday night after disappearing on Tuesday.The rescue video was filmed from the helmet of Ed Sorenson, a technical cave diver from Florida who located Bratchley and helped save him.About 45 minutes into Sorenson’s search, the video shows Bratchley, covered in mud, sitting on a ledge in the cave’s air pocket awaiting rescue.The video later shows the moment Sorenson surfaced with Bratchley.”Thank you for still being here and calm,” Sorenson told him.Bratchley was evaluated by medical crews on the scene and determined to be in stable condition.Sorenson said it was “very difficult” to find the British diver because conditions inside the cave were dangerous, and Bratchley’s guideline to the surface had been broken.”Rescues are very, very rare,” Sorenson said on ABC’s Good Morning America, “so any time I can bring somebody home back to their family and not in a bag, it’s a great day.”