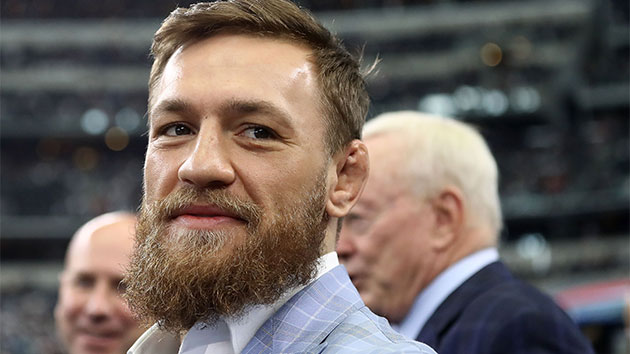 (MIAMI) — Prosecutors have released new footage of UFC star Conor McGregor getting arrested at a Miami Beach home after allegedly smashing and stealing a fan’s phone outside the Fountainebleau hotel.

The police bodycam footage shows McGregor calmly being led from a private home to a police vehicle, where he is handcuffed before getting inside.

McGregor is facing one felony charge of strong-armed robbery and one charge of misdemeanor criminal mischief after allegedly getting into an altercation with Ahmed Abdirzak, who was attempting to take a photo with McGregor on March 11, prosecutors say. He has pleaded not guilty to both charges.

McGregor was exiting a Miami nightclub at 5:20 a.m. when he encountered Abdirzak, police stated.

McGregor then picked up for the phone and left with it, according to police.

Federal prosecutors released surveillance footage from the incident, which they say captured the altercation.

In a statement to ABC News, McGregor’s team acknowledged the incident, saying McGregor “was involved in a minor altercation involving a cell phone that resulted in a call to law enforcement. Mr. McGregor appreciates the response of law enforcement and pledges his full cooperation.”

Abdirzak filed a civil suit against McGregor that has since been dropped after reaching an out-of-court settlement, The Miami Herald reported.

McGregor seemed to acknowledge the incident on Instagram the day after it occurred.

“Patience in this world is a virtue I continue to work on,” McGregor wrote. “I love my fans dearly. Thank you all.”