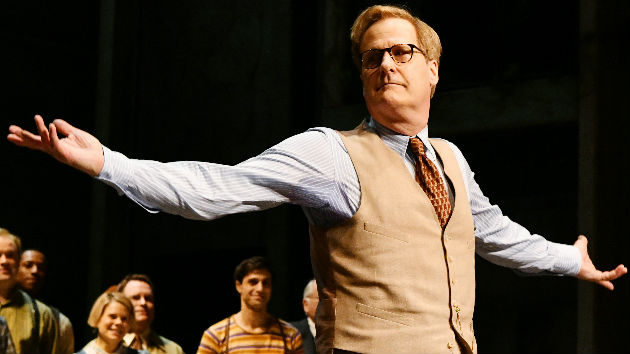 Photo by Slaven Vlasic/Getty Images for 'To Kill A Mockingbird"
Posted on April 18, 2019 by ABC News

(NEW YORK) — Since it debuted on Broadway in December, To Kill a Mockingbird has pulled in historic box office numbers and enthralled audiences with its updated take on Harper Lee’s classic 1960 novel.

Adapted for the stage by Aaron Sorkin, the play stars Jeff Daniels as small town Southern lawyer Atticus Finch and Gbenga Akinnagbe as the wrongly-accused man he defends in court, Tom Robinson. The play shows us a more flawed version of the heroic Atticus than we’ve come to know.

“We aren’t playing the white savior on the white horse…which is what Atticus has become,” Daniels explains to ABC Radio. “You don’t start as the great Atticus Finch, and that was our choice early on.”

Daniel explains as Atticus goes through Tom’s trial the experience changes him: “You just don’t go back to your porch and have a bourbon [after that],” he says.

The play also chose to use adult actors to portray the children, Scout, Jem and Dill, as well as give more insight into what Tom is going through. Akinnagbe says the injustice Tom faces is still very much relevant today.

“There were some things I related very well to Tom with,” Akinnagbe says. “It wasn’t that strange to me. Growing up in a country that is prejudice, that has a legal system that is prejudice and with the power dynamics, class and patriarchy being so out of whack, those things are still very much as they were in 1934, where the play is set.”

In addition to its Broadway run, the play will begin a two-year national tour, launching at the Kennedy Center in August 2020.

Austin makes history as first African American to lead Pentagon
“I was just trying to keep warm!” Bernie Sanders laughs on ‘Late Night’ about his meme-ready picture
‘Game of Thrones’ prequel, ‘Tales of Dunk and Egg’, in the works at HBO
Schumer announces Trump impeachment article to be sent to Senate Monday
COVID-19 delays strike again: ‘No Time to Die’, ‘Morbius’, and ‘Ghostbusters: Afterlife’ all bumped again
Jane Krakowski loves ‘Dickinson”s spin on the poet