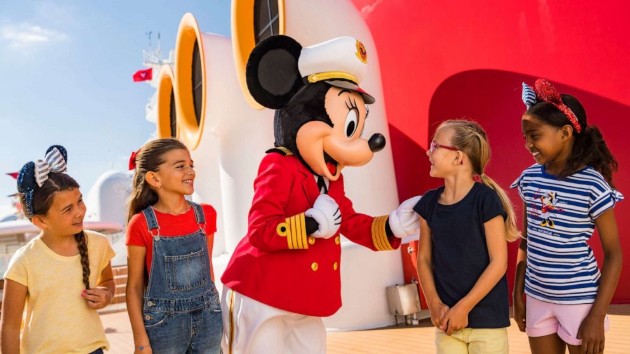 (NEW YORK) — Aye, aye, Captain Minnie Mouse! Disney Cruise Line announced Thursday the debut of Captain Minnie Mouse. The cruise line aims to inspire the next generation of female leaders in the maritime industry. In addition to the first ever pants-wearing Captain Minnie, DCL’s new youth programs and the funding of scholarships are designed to empower girls and young women to pursue careers in the cruise industry.”Captain Minnie Mouse, in her crisp new uniform with smart white trousers or skirt and a bold red jacket emblazoned with captain’s insignia, will make the rounds on all Disney ships starting in April,” Disney Cruise Line said.In 2019, Disney Cruise Line will sponsor four scholarships at the LJM Maritime Academy in the Bahamas for female cadets who aspire to be ship captains and shipboard leaders. The scholarships, one for each of the ships in the Disney Cruise Line fleet, will include tuition to the three-year program. The scholarships will include two years of study at the academy and one year of service aboard a Disney ship.Later this year, Captain Minnie will appear in an all-new youth activity where young captain hopefuls practice STEM (science, technology, engineering and math) skills in a fun maritime-themed activity in Disney’s Oceaneer Lab aboard all Disney ships.She’ll also visit kids in local communities. Captain Minnie Mouse will visit children in some of Disney Cruise Line’s home ports and ports of call. As part of these local community visits, Captain Minnie Mouse will be accompanied by a female Disney Cruise Line officer or crew member to showcase their roles in the maritime industry and raise awareness about career choices for women aboard a cruise ship. And of course, there’s merchandise.Items in the nautical-themed collection of apparel and gifts tout the tagline, “You Can Call Me Captain.” A brand-new Captain Minnie Mouse plush will be introduced this summer. On board in DCL’s Bibbidi Bobbidi Boutique, girls will soon be able to choose a Captain Minnie makeover. A new PANDORA Jewelry charm will also be available for purchase exclusively on board. The Walt Disney Company is the parent company of ABC News.

DHS to combat domestic violent extremism with $77 million from FEMA
Teyonah Parris says becoming Marvel’s Monica Rambeau has been her “most physical role to date”
Minority TikTok influencers are bringing awareness of COVID-19 vaccines to their communities
Michael Cudlitz on getting to know his character, and escaping COVID, with ‘Clarice’
‘Queer Eye’ star Karamo Brown is ready to start dating again: “I want to be married”
Victoria’s Secret plans to close up to 50 more stores this year