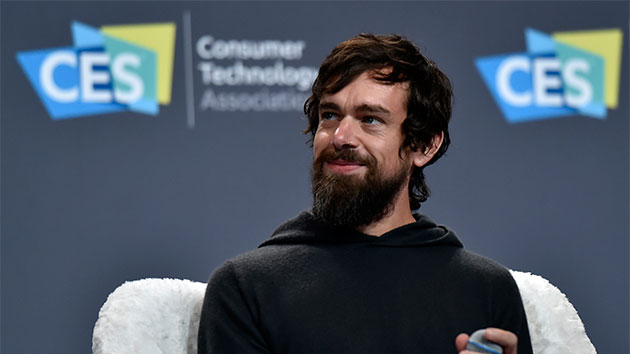 (NEW YORK) —  A TED Talk from Twitter CEO Jack Dorsey on Tuesday was hijacked by tough questions from the public — via Twitter — about the platform’s failure to crack down on abuse and hate speech.

The bearded co-founder of Twitter and Square took the stage at TED2019: Bigger Than Us, in Vancouver, British Columbia, and shared his regrets about the social media platform he created, and it’s struggle to deal with hateful content.

“Our purpose is to serve the public conversation, and we have seen a number of attacks on it. We’ve seen abuse, we’ve seen harassment, we’ve seen manipulation, automatic and human coordination, misinformation,” Dorsey said. “What worries me most is our ability to address it in a systemic way that is scalable.”

During the chat, Twitter users were invited to send questions to Dorsey, identified by the hashtag #AskJackAtTED. The questions were displayed live on screens behind the stage.

Dorsey was interviewed by the head of the TED organization, Chris Anderson, and the company’s current affairs curator, Whitney Pennington Rodgers.

“It’s a pretty terrible situation when you’re coming to a service where, ideally, you want to learn something about the world, and you spend a majority of your time reporting abuse, receiving harassment,” Dorsey said. “Last year, we decided that we’re going to apply a lot more machine learning, a lot more deep learning to the problem, and try to be a lot more proactive, so we can take the burden off the victim completely.”

Dorsey said that currently, 38% of abusive tweets are flagged by algorithms, so users don’t actually have to report them. “That’s up from 0% about a year ago,” he said.

He added that humans make the final decision about removing content on the platform.

Despite addressing the abuse comments, prominent Twitter users took the opportunity to grill Dorsey about specifics.

“Ooh exciting. @jack is taking questions from Twitter users live at TED today. Anyone?? I’d like to know why a video that showed me being beaten up & threatened with a gun to soundtrack of Russian anthem stayed up for 72 hours despite 1000s of complaints, @jack? #AskJackAtTED,” asked Carole Cadwalladr, a journalist at The Guardian who has been trolled on Twitter.

Ooh exciting. @jack is taking questions from Twitter users live at TED today. Anyone?? I’d like to know why a video that showed me being beaten up & threatened with a gun to soundtrack of Russian anthem stayed up for 72 hours despite 1000s of complaints, @jack?#AskJackAtTED pic.twitter.com/KuRdNoDyAY

New York Times op-ed contributor Wajahat Ali asked, “#AskJackatTed: doesnt Donald Trump violate the terms and conditions of Twitter with his inflammatory, inciteful tweets? For example his latest tweet against Ilhan Omar? Why is he above the standards placed on the rest of us?” #TED2019

#AskJackatTed: doesnt Donald Trump violate the terms and conditions of Twitter with his inflammatory, inciteful tweets? For example his latest tweet against Ilhan Omar? Why is he above the standards placed on the rest of us?#TED2019

Recently, Democratic Congresswoman Ilhan Omar reported an increase in threats on Twitter and other social media after a speech she gave at the Council of American-Islamic Relations (CAIR) in California. In the speech, she said “CAIR was founded after 9/11 because they recognized that some people did something, and all of us were starting to lose access to our civil liberties. So you can’t just say that today someone is looking at me strange, that I am trying to make myself look pleasant,” Omar added.

The remarks were quickly picked up by a number of conservative media outlets who complained that Omar was being dismissive of the 2001 terror attacks.

Rep. Ilhan Omar’s office did not immediately return a request for comment about harassment against her on the platform, or Dorsey’s TED Talk.

A spokeswoman for TED told ABC News that Dorsey answered some questions submitted via Twitter, but did not immediately specify which ones.

The company has released a statement updating users about abuse on the platform in a blog post on its site, called: “A healthier Twitter: progress and more to do.”

Three times the number of abusive accounts have been suspended within 24 hours of a report compared to the same time last year, the blog post said.

Rioter planned attack with militia, wanted to trap lawmakers and ‘turn on gas’: Prosecutors
Tom Holland reprises his role as Peter Parker for Avengers Campus’ ‘Spider-Man’ ride at Disneyland
Ice-T reflects on how he went from robbing banks as troubled youth to starring on ‘Law & Order: SVU’
All armed National Guardsman on duty in DC vetted by FBI amid inauguration threats
At least 21 states activating National Guard troops in capitals to prepare for possible attacks
‘WandaVision’ star Paul Bettany on his father’s struggle to come out of the closet