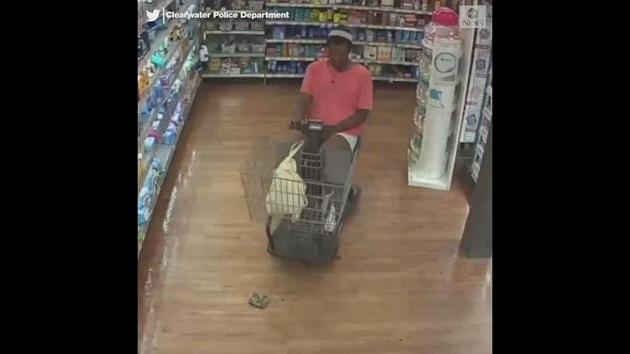 (CLEARWATER, Fla.) — Police are asking for the public’s help to locate a suspect in a motorized shopping cart who allegedly stole a Walmart shopper’s wallet.The victim and his girlfriend were inside the Walmart on State Road 590 in Clearwater, Florida, on April 1 when the victim dropped his wallet on the floor inside the store, police said.Before the man could retrieve his wallet, the suspect approached on a motorized cart and picked up the wallet and left the store on foot, Clearwater police said in a statement.The victim and his girlfriend followed and soon confronted the suspect.The suspect, after being called out for allegedly stealing, threw the wallet at the victim and his girlfriend, police said.But before returning the wallet, police said the suspect removed all of the cash.Police released cellphone video taken by the victim at the scene and are asking for the public’s help to identify the suspect.