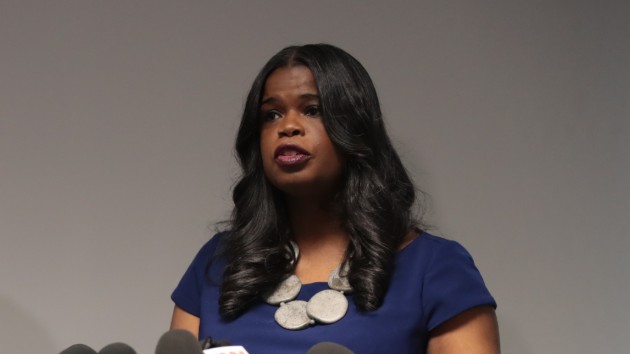 (CHICAGO) — Cook County State’s Attorney Kim Foxx referred to Empire actor Jussie Smollett as a “washed up celeb who lied to cops,” according to newly revealed text messages.Foxx made the comment to her top deputy, Joseph Magats, on March 8, just as news surfaced that the actor had been indicted on 16 counts for allegedly lying to Chicago police about being attacked in a hate crime.  “Sooo……I’m recused, but when people accuse us of overcharging cases…16 counts on a class 4 (felony) becomes exhibit A,” Foxx texted Magats, according to documents released on Tuesday.She also compared the case against Smollett, 36, to her office’s sexual abuse case against embattled R&B singer R. Kelly, to whom she referred as a “pedophile.””Pedophile with 4 victims 10 counts. Washed up celeb who lied to cops, 16. On a case eligible for deferred prosecution I think it’s indicative of something we should be looking at generally,” Foxx wrote. “Just because we can charge something doesn’t mean we should. … it’s not who we want to be.”The Cook County State’s Attorney Office released the messages on Tuesday in response to a Freedom of Information Act request by media outlets including ABC News. The office released 178 pages of text messages and 3,655 pages of emails connected to the case, including communication among staffers and some of their interactions with the media.Some of the correspondence was redacted due to a court order sealing Smollett’s criminal case.The messages offer a glimpse into the state’s attorney’s private thoughts on a high-profile case from which she ultimately recused herself. The newly revealed correspondence between Foxx and her employees raises questions about the role she may have played in the case after said recusal.Her office declined to comment on the specifics of the case, citing an ongoing review.”As the case is currently under review, we are not in a position to comment on specificities related to this topic,” the office said in a statement Tuesday. “We look forward to the findings of the Cook County Independent Inspector General’s Office’s review of how we handled this case.”Foxx faced fierce backlash from the Chicago Police Department and Mayor Rahm Emanuel when her office announced it was dropping criminal charges against Smollett in an effort to focus its resources on violent crimes.Emanuel said dropping the charges against Smollett “is without a doubt a whitewash of justice.” And city officials sued the actor for $130,000 last week, seeking reimbursement for funds spent investigating what they called bogus hate crime allegations.The lawsuit laid out a detailed account of the allegations against Smollett, who told police he was attacked on Jan. 29 by two men who shouted homophobic slurs at him, wrapped a noose around his neck and poured an unknown liquid on him. The timeline includes a 41-point, blow-by-blow description, from when Smollett first met the Osundario brothers — the purported attackers — in the fall of 2017 until the final allegation that Smollett continued to be in contact with the brothers days after the alleged attack.A lawyer for Smollett, who portrays a gay musician on Fox’s Empire, said the actor “vehemently denies” accusations of making false statements to police and “will not be intimidated into paying the demanded sum.”

States trying to ramp up vaccinations frustrated by shortages
Indoor dining set to reopen in Chicago, Baltimore as NYC, Los Angeles await answers
‘Game of Thrones’ prequel, ‘Tales of Dunk and Egg’, in the works at HBO
Olivia Jade returns to YouTube after over a year, “I can’t change the past”
How working from home due to COVID could be a double tax hit for some
Athleta extends sizing to offer sizes up to 3X