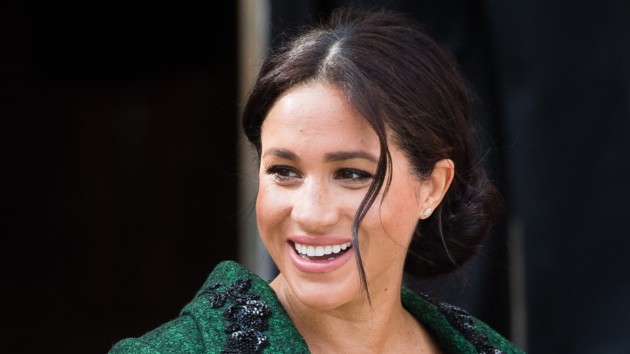 (NEW YORK) — Meghan, the Duchess of Sussex, is due to give birth any day.While she and Prince Harry await their first child, the world is waiting to find out where exactly Meghan will give birth. Buckingham Palace has revealed only that the birth will be private, with an announcement coming about the birth only after Harry and Meghan have celebrated “privately as a new family.”The most recent high-profile royal births — Prince William and Duchess Kate’s three children — took place at the Lindo Wing at St. Mary’s Hospital. That is also where Meghan’s mother-in-law, the late Princess Diana, gave birth to her sons, William and Harry, in the 1980s.The lack of information around where Meghan will give birth has led to lots of speculation, including one (unconfirmed) theory that Meghan may choose to have a home birth.If she did, Meghan would not be the first royal to do so. Queen Elizabeth II gave birth to all four of her children, including Meghan’s father-in-law, Prince Charles, at home.Of course home for a royal is different than for the rest of us. Queen Elizabeth’s four deliveries took place at Buckingham Palace, a 775-room royal residence in London, and Clarence House, which is today the official London residence of Prince Charles and Camilla, the Duchess of Cornwall.Meghan and Harry recently moved to their newly-renovated home, Frogmore Cottage, an 18th-century home on the grounds of Windsor Estate, about 30 miles from London.Any member of the royal family would also have access to top medical care, whether in the hospital or at home. That access to care, experts say, is critical for both mother and baby.”In obstetrics, we have two lives at stake, two patients and the clock is ticking,” said Dr. Jennifer Ashton, ABC News chief medical correspondent and a practicing OBGYN. “If that baby gets into trouble, we don’t have 20, 30, 40 minutes to go from the bedroom to the operating room because minutes matter.” As rumors swirl around Meghan’s upcoming delivery, here are the most pressing questions answered about home births:

How common are home births?Home births are on the rise in the U.S., data shows.Approximately 35,000 births, or just under 1 percent, per year occur in the home in the U.S., according to the American College of Obstetricians and Gynecologists (ACOG).In the U.K., where Meghan will give birth, just over one in 50 pregnant women give birth at home, according to the National Health Service (NHS).

Why do women want home births?A home birth offers a chance for a woman to have more control over her delivery (everything from location to music and lighting), and to have less medical intervention, according to Dr. Sarp Askel, an OBGYN in New York City.”The low intervention aspect of a home birth, plus the ability to be able to control your birth experience is incredibly attractive to a lot of women,” he said. What are the risks of a home birth?Home births are associated with a “twofold increase in perinatal death” according to a 2017 position paper by ACOG. Home births are also associated with a triple risk of incidents of seizures and serious neurological dysfunction for the baby.For the mother, the main risk factor in a home birth is related to bleeding.Based on statistics alone, Meghan giving birth to her first child in the U.K. would put her more at risk of needing transfer to a hospital for complications during delivery if she choses a home birth. In the U.K., 36 to 45 percent of women having their first baby require transfer to a hospital after a planned home birth compared to 9 to 13 percent of women who have had children before.In the U.S., even with the risks, ACOG acknowledges that the risk versus benefit of a planned home birth “remains the subject of debate.” Most of the data on home births comes from observational studies, not randomized clinical trials.The organization told ABC News’ Good Morning America in a statement, “Although the American College of Obstetricians and Gynecologists believes that hospitals and accredited birth centers are the safest settings for birth, each woman has the right to make a medically informed decision about delivery.” Does age matter when it comes to home births?The Duchess of Sussex will give birth to her first child at age 37, which technically puts her in the medical category being of “advanced maternal age.”That would not automatically preclude her though from giving birth at home, according to Aksel, who is not involved in Meghan’s treatment.”Inherently don’t think just because a woman is 37 she should be labeled high-risk and has to be in the hospital,” he said. “However, [increased] age does put women at increased risk for developing complications during labor.”

Who should not have a home birth?Women who are in a high-risk pregnancy should not consider a home birth, according to both Aksel and Ashton.Other disqualifying factors for a home birth include: Being pregnant with more than one baby; Having had a previous C-section birth; Being breech (i.e. the baby’s buttocks and/or feet are positioned to be delivered first); Maternal medical conditions, like high blood pressure and gestational diabetes; And high-risk fetal issues.

What should women consider before choosing a home birth?Askel recommends that a pregnant woman considering a home birth have an honest conversation with herself and her health care provider about her risk and her tolerance for risk factors associated with a home birth.”Be honest about what kind of candidate you are,” he said.Women also need to be prepared to have a certified birth provider — whether that’s a midwife, a nurse or a doctor — oversee the birth at their home. “I don’t think there’s any such thing as a low-risk pregnancy because any pregnancy can turn into a high-risk pregnancy in a matter of minutes,” he said. “Having someone [leading the birth] who is well versed and experienced in that is really important.”Finally, any woman considering a home birth should have a well-rehearsed and documented contingency plan in place, advises Aksel. A major part of that plan should include plans for quick and reliable transport to a nearby hospital, if needed.”Make sure that you have a very well-prescribed, comprehensive plan in place for options a, b and c, all the way to z,” he said. Copyright © 2019, ABC Radio. All rights reserved.