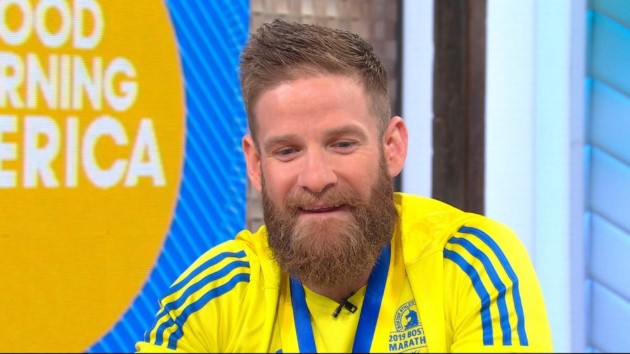 (NEW YORK) — A determined Marine veteran who pulled himself across the finish line of the Boston Marathon and fell short of his goal to qualify for the New York City Marathon received a big surprise when ABC News’ Good Morning America told him he officially has a coveted spot in the race. Micah Herndon made headlines Monday for his painful, yet triumphant, finish, battling to end the race on his own through cramping and pain. “After I knew I couldn’t get my goal pace cause I was trying to qualify for the New York City Marathon, I just had one mission in mind and that was to finish by myself,” he said. ABC’s Robin Roberts told Herndon that the organizers of the New York City Marathon have invited him to run the race in November. “I appreciate that. That’s good stuff right there,” Herndon responded, visibly taken aback. “Whoever set that up, thank you.””I will be ready by the fall, believe that — that’s for sure,” he said. “Wow.” The 31-year-old told ABC News the pain began as the humidity from the rainy day affected him, and his legs started to break down at mile 22 of the 26.2-mile race. “You just gotta push through it, you know? Once I realized I couldn’t achieve and maintain my goal pace, I had one goal in mind, and that was just to finish that race on my own,” he said.Herndon may have finished the race by himself physically, but he was carrying with him the memories of friends he lost in the Marines. He was deployed to Iraq in 2008 and Afghanistan in 2009 as a lead machine-gunner in the “Lava Dogs” division — the 1st Battalion, 3rd Marines, based out of Hawaii — Ohio’s Record-Courier reported in a pre-race profile.Running became “therapy” for Herndon after he struggled to reintegrate into civilian life following his tours, he told ABC, and it is a way for him to cope with post-traumatic stress disorder and survivor’s guilt. “To honor them, because they’re not here anymore and they can’t run anymore,” he said. “Just to honor their names and their family that’s still here.” He told GMA that he said his friends names aloud to keep himself motivated while running. Herndon also has special tags on his running shoe laces that have the last names of his friends.This was Herndon’s third marathon, which he finished at 3 hours and 38 minutes — about 40 minutes slower than his last marathon, and not fast enough to qualify for New York. Herndon was determined to get back to training to qualify for Boston again and, from there, qualify for New York. “I will learn from this experience,” he said. “Every race is a journey, and I feel like you learn from your mistakes and just better yourself for the next race.”