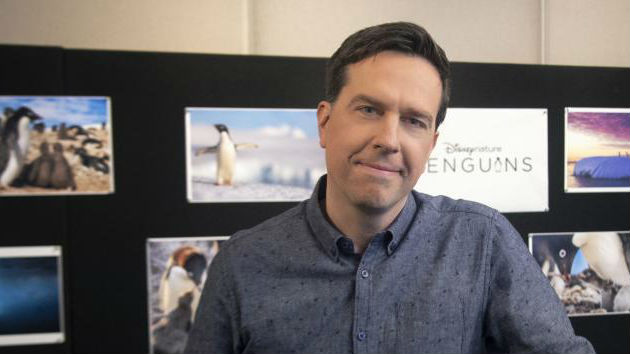 (NEW YORK) — Ever wonder what the day-to-day life of a penguin is like? Disneynature’s new documentary, Penguins, aims to give you some insight.

The film, shot over the course of three years in Antarctica, follows the coming-of-age story of an Adélie penguin named Steve as he finds a life partner and starts a family.

The penguin’s bumpy journey is made even more relatable thanks to Ed Helms, who provides both the narration and Steve’s hilarious voiceover. Helms tells ABC Radio that recording Steve’s “inner voice” was a “very playful and improvisational process.”

“You can’t help smiling at them,” famed scientist and Disneynature ambassador Dr. Jane Goodall says of Steve and his penguin pals.

“People say, ‘Oh Disney gives them personality,’ Disney doesn’t give them a personality. Disney reveals their personality to us,” Goodall adds.

To capture the penguins in their element, Helms explains, “[Filmmakers] spent three years [in Antarctica], just shooting all this footage and it’s one of the harshest environments on the planet.”

“I spent eight hours in the voiceover booth and it was a little over-air conditioned. So I think I had a similar experience to them,” he jokes.

Penguins hits theaters today, ahead of Earth Day on April 22. A portion of the proceeds from the first week of ticket sales goes to the Wildlife Conversation Center to help protect penguins across the southern hemisphere.

Melissa Benoist is absolutely in love with being a mom
Courteney Cox says she and fiancé Johnny McDaid haven’t seen each other March
Zendaya announces 2 new episodes of ‘Euphoria’
Trump’s ballot fraud allegations embellished and not widespread: Experts
Florida’s Latino voters being bombarded with right-wing misinformation, experts and advocates say
Jeff Bridges has been diagnosed with cancer