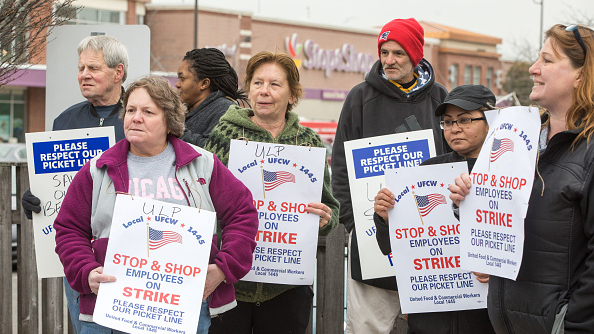 (BOSTON) — As a strike by 31,000 unionized Stop & Shop supermarket workers throughout the Northeast stretched into its seventh day Wednesday, Joe Biden was ready to speak up.The former vice president is scheduled to join the striking workers at a rally at one of their picket lines in Boston on Thursday, according to representatives of the United Food & Commercial Workers International.Workers at about 240 Stop & Shop stores — most of which are in Massachusetts, New Jersey, Connecticut, New York and Rhode Island — walked off their jobs April 11 after the company proposed changes to wages and pension and health care plans.”Negotiations are continuing. Our goal remains the same — reaching a fair new agreement and returning our focus to doing what we do best — taking care of our customers,” Stefanie Shuman, a spokeswoman for Stop & Shop, said in a statement to ABC News on Wednesday.The workers’ labor contact expired on Feb. 23.”Stop & Shop’s latest proposal will drastically increase out-of-pocket health care costs, kick approximately 1,000 employees’ spouses off of their health care plan, and make it more challenging for 31,000 people to provide for themselves and their families,” the UFCW said in a statement this week. “If the company’s most recent offer becomes a reality, every working family, neighborhood, consumer, and community will be hurt.”The union says the company’s latest offer would take away premium pay for union employees who work on national holidays and Sundays, eliminate pay raises and reduce the company’s contributions to pensions and health care costs.The company, however, says under its proposal, workers’ wages would rise and remain above the industry average. Stop & Shop, owned by Dutch supermarket giant Ahold Delhaize, would cover at least 92 percent of health care premiums for family coverage and 88 percent for individual coverage, according to the proposal.The company says workers would see the health care premiums they pay rise $2 to $4 a week.Since the strike started, Stop & Shop management has struggled to keep shelves stocked and stores open as delivery truck drivers, who are members of the Teamsters union, refused to cross picket lines.On Tuesday, Stop & Shop president Mark McGowan issued an apology to customers for the “inconvenience” the strike caused.”First, we want you to know, Stop & Shop recognizes the valuable role our associates play in creating a great experience for you,” McGowan said in a statement. “They are a part of your lives, a part of our community, and key to our success. That’s why it is so important to us to provide a fair contract to our employees who are members of the UFCW unions currently on strike.” Union representatives said the company, founded in Massachusetts in 1914, has temporarily closed dozens of stores as it struggled to staff them with managers and nonunion workers.”Most stores remain open for business seven days a week, from 8 a.m. to 8 p.m., with some reduced services,” McGowan said. “However, bakery, customer service, deli and seafood counters will not be operational, and we currently have a limited meat selection. Our gas stations are also closed at this time.” Some striking workers said they are eager to get back to work and hope a contract agreement can be reached soon.”To be on the sidewalk, getting yelled at by strangers instead of being in there slinging cold cuts is pretty demoralizing. This needs to end, yesterday,” Ian Giribaldi, an eight-year Stop & Shop employee, told ABC Boston station WCVB-TV.Kenneth Farnham, who has worked for the supermarket chain in Boston for 15 years, told WCVB-TV, “I want to get back to work.””All I asked is a fair shake for myself and all Stop & Shop employees,” Farnham said. “We deserve it.”