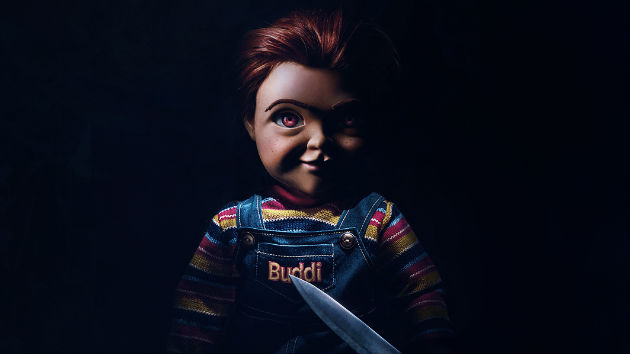 (LOS ANGELES) — With a single, creepy picture, Orion Pictures has unveiled the new Chucky, the pint-sized villain of its reboot of Child’s Play.

As previously reported, Mark Hamill is voicing the murderous ginger doll, and he captioned the photo, “He’s more than a toy… He’s your best friend!”  The new Chucky looks kinda like the old one, but he’s lot more high tech.  His hair is much neater, and his overalls say “Buddi” on them, instead of  “Good Guys.”

In the reboot, Chucky is bought by a mom, played by Aubrey Plaza, for her son. Gabriel Bateman plays the unlucky kid with the new “best friend.”

Brian Tyree Henry also stars in the film, which director Lars Klevberg and It reboot producers Seth Grahame-Smith and David Katzenberg are bringing to theaters June 21.

Brothers Peter and Benjamin Bratt explain the inclusive conversation they want to have with the rerelease of ‘Follow Me Home’
See Queen Elizabeth II and Margaret Thatcher face off in ‘The Crown’ season 4 trailer
Coronavirus live updates: One boy likely responsible for over 100 cases at retreat: CDC
Jennifer Lopez reveals she almost wasn’t cast in ‘The Wedding Planner’
Armie Hammer reveals COVID-19-related mental health struggles
United to test all passengers for COVID-19 on select London flights