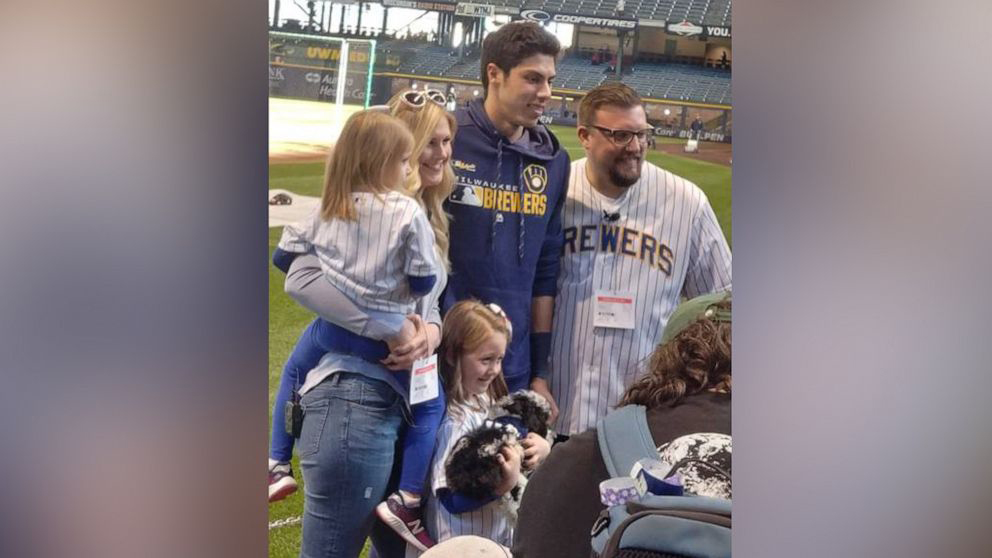 (MILWAUKEE) — A Major League Baseball player just made a little girl’s dream come true by gifting her a puppy after seeing a sign she held up during a game.Christian Yelich, an outfielder for the Milwaukee Brewers, surprised Lola Labodda, 6, and her sister Libby Labodda, 4, with an 11-week-old Miniature Goldendoodle, named Yeli, during batting practice at Miller Park on Monday.The plan to get Yeli first began when Lola’s sign, which read, “Yelich, hit a home run and my dad buys me a puppy!” gained viral attention.The Brewers shared the moment on the team’s Twitter page on March 30, and two weeks later, the family received Yeli.”It’s something I never expected and it truly shows that these players care about their fans,” dad Mike Labodda of Muskego, Wisconsin, told “Good Morning America.” “It shows what kind of person he is.”Lola was diagnosed with type 1 diabetes when she was only a year old. Her family already has a rescue dog for a pet, but she showed interest in having her own service dog after meeting one recently, Labodda said.”Without the service dog, it is a 24/7 thing to monitor my daughter,” Labodda said, adding that his daughter uses two devices to monitor and regulate her condition. “My wife and I, we’re up at all hours of the night. With the dog, it basically gives the family a sense of relief.” Since the family was planning to attend the March 30 Brewers game, Lola told her dad she wanted to make a sign.”I said, ‘You can pick a player, and if he hits a home run, I’ll get you a puppy,"” Labodda explained.Lola called out Yelich on the poster, asking him to hit one out of the park for her.”The first inning, second pitch, there it was,” Labodda told “GMA,” laughing.But Yelich didn’t just hit a homer. When he and the Brewers caught wind of Lola’s sign, Yelich decided he’d give the Laboddas a pup himself.Lola and her parents hope that within the year, Yeli will be trained as a diabetes alert dog. Labodda said that once trained, Yeli will protect Lola in medical emergencies, all while being her “best bud” wherever she goes.