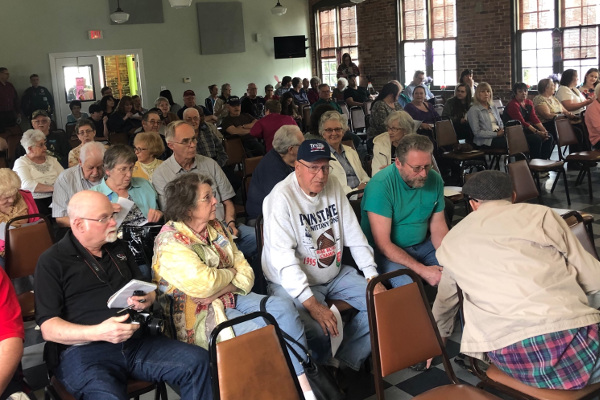 Reynoldsville, PA – Jefferson County was the first meeting along the statewide “marijuana listening tour” to have a majority of attendees say they were against the possibility of legalizing recreational marijuana.

Of the 36 people who spoke, 21 were against it and 13 were in favor of legalization. The other two were undecided.

Most of the people who spoke out cited their religious reasons or their belief that marijuana is a gateway drug.

Others said they believed legalization could bring additional revenues and other benefits to the state.

Lt. Governor John Fetterman says there are 30 more counties to visit and that this is a way of “taking the temperature” of how Pennsylvanians feel about a potential law change. Nothing has been decided yet.

Listen to some of the comments Lt. Governor John Fetterman gave to the press after the stop on the marijuana listening tour in Jefferson County on April 13, 2019.

If you weren’t able to make it to the listening tour in person, you can also submit your online feedback with how you feel about recreational marijuana at the PA Governor’s website.

The “marijuana listening tour” with Lt. Governor John Fetterman is happening from 2:30 until at the Reynoldsville Foundry. It’s open the public, and people are encouraged to come and share their opinions about the possibility of legalizing recreational marijuana in Pennsylvania.If you are unable to make it to a meeting, you can share your thoughts online: https://www.governor.pa.gov/recreational-marijuana-feedback/

Click Here to report the last report about the Feb. 21 meeting for Clearfield County.