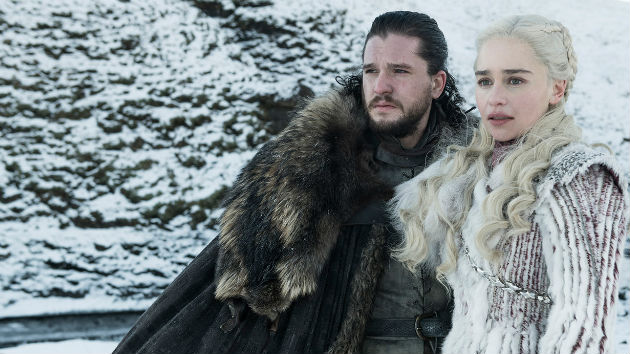 (LOS ANGELES) — If it feels like everyone you know watched Game of Thrones Sunday night, that’s probably true — and it has the massive ratings to prove it.

The HBO show’s final season premiere was watched by a record 17.4 million viewers across HBO’s platforms, topping the previous series high of 16.9 million viewers for the season seven finale.

The 9 p.m. airing of the show alone was viewed by 11.8 million people, but tons of subscribers were watching on the HBO NOW streaming service as well – up about 50% from last season’s finale. Sunday accounted for the largest night of streaming activity ever for HBO.

The season eight premiere was also the most-tweeted-about episode of the series ever, racking up more than five million tweets and 11 million mentions over the course of the weekend.

Lawmakers outraged at images of National Guard sent from Capitol to parking garages
‘Game of Thrones’ prequel, ‘Tales of Dunk and Egg’, in the works at HBO
Coronavirus live updates: Fauci says lack of truthfulness ‘very likely’ cost lives
Olivia Jade returns to YouTube after over a year, “I can’t change the past”
How to fix home appliances yourself before spending hundreds of dollars
Report: Dustin Diamond undergoes first round of chemo, diagnosed with stage 4 small cell carcinoma