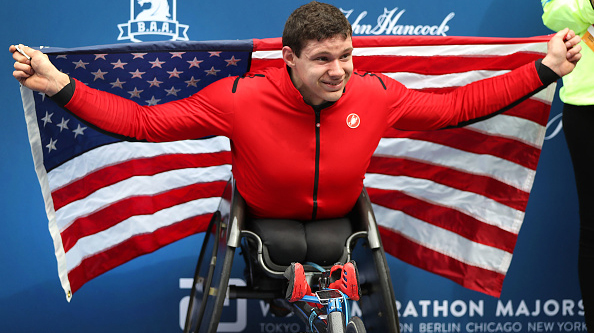 (BOSTON) — Daniel Romanchuk became the youngest person ever and the first American in 26 years to win the men’s wheelchair division of the Boston Marathon Monday.The 20-year-old finished the 26.2-mile race in one hour, 21 minutes and 36 seconds, according to WBZ, a local CBS affiliate, beating Japan’s Masazumi Soejima by nearly three minutes. The last time an American won in this division was 1993.”Daniel is on fire,” Disabled Sports USA communications manager Shuan Butcher told ABC News. “Being the youngest athlete to win the wheelchair race in Boston can only mean great things ahead.”Romanchuk was the one to watch in the Boston Marathon, having become the first American man to win the men’s wheelchair division at the New York Marathon in November, according to Runner’s World. He also won the men’s wheelchair division at the Chicago Marathon in October.In 2018, Romanchuk placed third in the Boston Marathon, completing the race in one hour, 50 minutes and 39 seconds, with a pace of four minutes and 14 seconds.Romanchuk is also a student at Parkland College in Illinois and trains at the University of Illinois. In a statement to ABC News, Parkland College spokesperson Stephanie Stuart congratulated Romanchuk on his victory.”His accomplishment is an inspiration to our campus community and is a testament to the limitless potential of community college students across the country. We look forward to celebrating with him when he returns home,” Stuart said.Romanchuk began participating in adaptive sports at the Kennedy Krieger Institute, a Disabled Sports USA chapter in Baltimore, Maryland, when he was 2 years old, according to the organization, after he was born with spina bifida, a birth defect that affects the spinal cord.He competed at the Paralympic level World Championships in 2015 and 2017 and at the 2016 Paralympic Games in Rio de Janeiro, Brazil.Manuela Schär of Switzerland won in the women’s wheelchair division in Boston at one hour, 34 minutes and 19 seconds, per Runner’s World. This is her second win in Boston.”At last year’s Boston Marathon, I was so cold and wet that I had absolutely no idea what position I was when I crossed the finish line. I was just glad to get inside!” Romanchuk wrote in a Facebook post in December. “Excited for 2019, proud to represent the USA, and hoping for dry skies and a tailwind!”