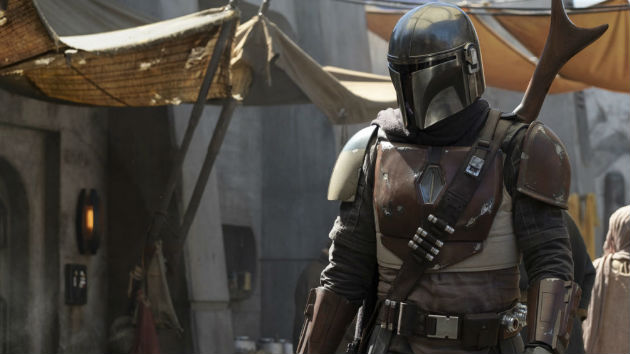 (CHICAGO) — Fans itching for the Disney+ series The Mandalorian got their first glimpse at the anticipated live-action project when the show took center stage on Sunday’s final day of the Star Wars Celebration expo in Chicago.

Before a packed hall of fans, creator and Iron Man director Jon Favreau and his Star Wars: The Clone Wars collaborator Dave Filoni introduced Game of Thrones star Pedro Pascal as the new series’ title character, a bounty hunter and gunslinger operating in the far reaches of the galaxy.

Star Wars fans know the title refers to the race born on the planet Mandalore, the same planet that gave us legendary bounty hunters Jango Fett and his son, Boba.

Pascal said, “I think that these incredibly talented men who also love Star Wars very much, have created an incredible, iconic character – THAT I GET TO PLAY!” — before laughing maniacally.

Former MMA fighter Carano described her character, Cara Dune, as a “loner” and former Rebel shock trooper. “I’ve never been part of something so secret,” the former Deadpool villain said, adding how excited she is to be in the Star Wars “family.”

Weathers’ character, Grief Karga, is a bounty hunter guild leader who hires the title character for a job because, he says, “The Mando is a guy who he figures can get the job done.”

One of the directors of the series’ early episodes will include Thor: Ragnarok director Taika Waititi, who will reportedly also play the robotic assassin droid IG-88.

The Mandalorian debuts November 12 on Disney+, which is owned by ABC News’ parent company, Disney.

Parents of 545 kids separated at border still haven’t been found: ACLU
‘Normal People’ star Daisy Edgar-Jones lands lead in ‘Where the Crawdads Sing’
David Leisure dishes on ‘The Goldbergs’ ‘Airplane!’-inspired season premiere
First trailer drops for Disney’s ‘Raya and the Last Dragon’
Jennifer Garner reveals her mother is the reason why she’s so down to earth
Mark Ruffalo and Robert Downey Jr. have an issue with Chris Pratt being dubbed the worst Chris in Hollywood