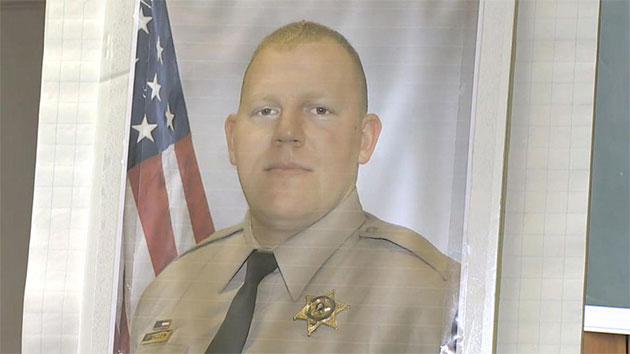 (SEATTLE) —  A sheriff’s deputy in Washington state has died after he was shot and killed while responding to a disabled vehicle blocking the road.

Cowlitz County deputy Justin DeRosier was dispatched to Fallert Road in Kalama just before 9:30 p.m. Saturday when he was shot, Sheriff Brad Thurman told reporters at a news conference Sunday afternoon. DeRosier stepped out of his squad car to check the disabled motor home before he stated over the radio that he had been shot, Thurman said.

DeRosier died around midnight while undergoing surgery at the PeaceHealth Medical Center in Vancouver, Thurman said. His family, who Thurman described as being prominent in the community, was not able to see him before he died.

“Most of us have known him most of his life,” said Cowlitz County Undersheriff Darren Ullman said through tears.

Ullman said DeRosier “loved his job” and “was incredibly good at it,” adding that he was rapidly working his way up through the department, Ullman said.

His death marks the first time the sheriff’s office lost a deputy in the line of duty, Thurman said. He leaves behind a wife and 5-month-old daughter named Lily, Ullman said.

“He will be with us forever, and you will be truly missed,” Ullman said.

An active manhunt is underway for the suspect who shot DeRosier, said Clark County Cmdr. John Horch. Authorities are currently processing the scene of a residence nearby, where a search warrant was just served, Horch said.

Investigators are asking any possible witnesses to come forward with tips on the suspect.