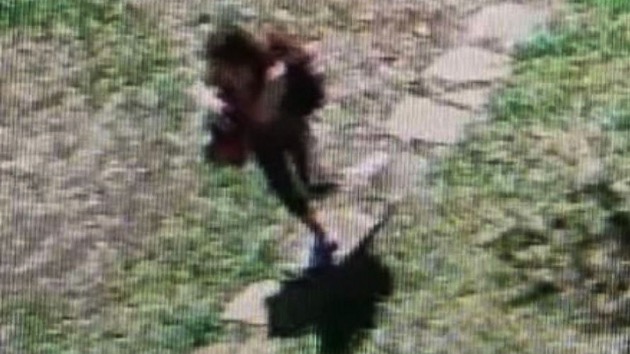 (Wise County Sheriff's Office) Authorities in Texas released this image asking for help in finding a young woman who they say mysteriously pleaded for help through a home's security system before fleeing the scene, April 9, 2019.
Posted on April 12, 2019 by ABC News

(WISE COUNTY, Texas) — Authorities in Texas are looking to find a young woman who they say mysteriously pleaded for help through a home’s security system before fleeing the scene.The woman, believed to be between the ages of 15 and 25, was seen on surveillance cameras at about 1:15 p.m. Tuesday in the Indian Trails subdivision between Decatur and Bridgeport, Texas, the Wise County Sheriff’s Office said.The woman, carrying a backpack, approached a home and left a message asking for help on the resident’s security system voicemail, according to the sheriff’s office.”I’m really scared. Will you please open your gate? Please?” she said in the four-second video released, according to ABC Dallas affiliate WFAA.Surveillance footage in the area showed her looking around as though someone was following her, the sheriff’s office said.She stayed in the area “until something appeared to attract her attention,” the sheriff’s office said, and then she immediately turned and ran toward a wooded area.”There’s some urgency in her voice,” Wise County Sheriff Lane Akin told WFAA. “It’s troubling… to know that this young woman is apparently concerned, in some level of need.””The entire neighborhood has been canvassed and no one saw her or recognized her,” the sheriff’s office said in a statement on Wednesday.There were no reports of runaways in the area, the sheriff’s office said, and local school districts said no one matching her description was absent from school during that time.Anyone with information is urged to call the sheriff’s office at 940-627-5971.Copyright © 2019, ABC Radio. All rights reserved.