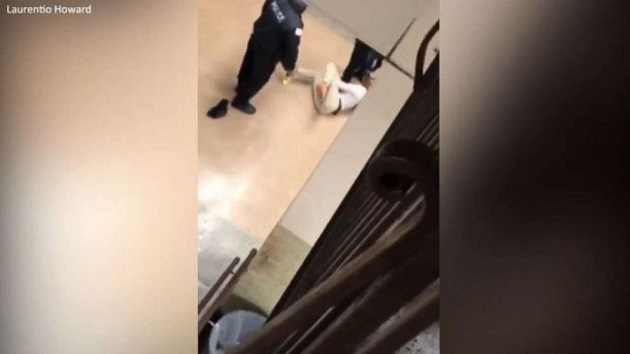 (CHICAGO) — The actions of two former Chicago school resource officers toward a 16-year-old student, including dragging her down a flight of stairs and Tasering her three times, are being further called into question after the release of new surveillance video on Thursday.Dnigma Howard, 16, had allegedly disobeyed a teacher who told her to put her phone away when she was kicked out of class in the early February incident. Her father, Laurentio Howard, had come to John Marshall Metropolitan High School to pick up his daughter when a confrontation between the teen and two school police officers deteriorated into a physical fight.In cellphone video shared days later, Dnigma Howard can be seen at the bottom of a flight of stairs, kicking out at the officers — one male and one female — but it’s unclear what led up to the incident.School surveillance video newly released by Chicago ABC station WLS-TV on Thursday tells a different story than what police said at the time — that the 16-year-old began fighting the officers. Instead, in the surveillance video, Howard and an officer can be seen standing at the top of the stairs when the officer grabbed her and tackled her to the ground, then dragged her down the stairs by one leg.”In the video you can see they pull her by the leg down the stairs, the whole flight of stairs,” Laurentio Howard, who was standing by as his daughter was punched and Tased, told WLS.”I thought maybe they were going to try to choke her out or she would lose consciousness or something like that,” he added. “They had their foot on her chest. She has asthma, she’s telling me she can’t breathe.”The initial cellphone video did not fully show the actions of the police officers at the bottom of the stairs as they moved out of view. In the new video, they can be seen pinning her to the ground, throwing several punches and eventually using a stun gun on her three times.Both officers were reassigned in the wake of the incident, Chicago police said in February.The department did not offer further comment after the release of the surveillance video this week, deferring to an ongoing investigation.”We hold our officers to the highest level of professional standards. CPD will remain guided by the facts of the investigation,” the department said in a statement. “Due to the fact that this incident is currently under the jurisdiction of COPA for the purpose of an independent investigation, we cannot comment on the specifics of the incident or the investigation.”Dnigma Howard was initially charged with two felony counts for aggravated battery against a peace officer. Those charges were later dropped by the State’s Attorney’s Office.”The Board of Education and the Chicago Police Department continue to fail our children,” Howard’s lawyer, Andrew M. Stroth, said. “An unarmed, 16-year-old girl was beaten, kicked, punched and Tasered by Officers Johnnie Pierre and Sherry Tripp at Marshall High School. The Inspector General’s report and the Consent Decree have made clear recommendations to effectively address the issue of police in school.”Stroth also called on Mayor-elect Lori Lightfoot to “address this important issue and make our schools safe.”