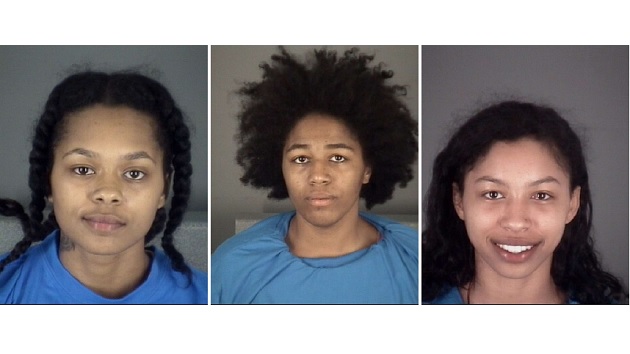 (NEW YORK) — Three women were “air drying” in the nude at a Florida rest stop before they led officers on a wild highway chase, according to police.Officers were responding to a “suspicious persons” call at an I-75 rest area in Pasco County, Florida, at around 11 a.m. Wednesday when they saw the women “standing in the nude putting on suntan lotion,” according to dispatch audio. The women, later identified as Oasis Mcleod, 18, Jeniyah Mcleod, 19, and Cecilia Young, 19, told the responding officer that they were “air drying” after showering, according to Florida Highway Patrol. They jumped into a vehicle and fled the scene as the officer tried to gather their information, leading authorities on a long and wild chase, FHP said in a statement.Police said the driver nearly ran over a pedestrian and an officer, who had to “jump back to avoid being struck by the car,” according to the statement.”I attempted to initiate a traffic stop on the vehicle. As soon as I did so, the vehicle increased its rate of speed, and then the driver entered the oncoming lane of traffic,” the statement said. “This erratic maneuvering caused multiple vehicles to take evasive action and travel onto the westbound grass shoulder of State Road 52, in order to avoid a collision.”FHP called off the initial chase, but told nearby agencies to be on the lookout. An officer spotted the women later on at a nearby convenience store, where they evaded arrest for a second time.The final pursuit ended with police deploying stop sticks, a pursuit intervention technique, to deflate their tires. The vehicle came to a halt, but the women “interlocked their arms together” and refused to exit, police said.Responding officers broke out the car windows, tasered the women and took them into custody. Several of the troopers sustained minor injuries throughout the episode.Police found marijuana in the vehicle and Mcleod was charged for driving under the influence after failing a field sobriety test, court documents showed.The officer was attempting to arrest one of the women when the driver purposely tried to run him over while the other passenger came at him with a metal bat, police said.”Sgt. Dennis Rich, seeing that Trooper Paulin was in imminent danger, rammed the suspect vehicle with his marked patrol vehicle, and the vehicle fled again,” the statement said.The trio faces a barrage of charges, including fleeing to elude, resisting arrest, aggravated assault and indecent exposure. It’s unclear if they have retained attorneys.