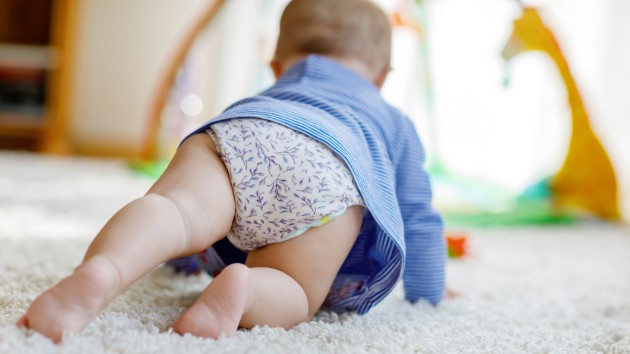 (NEW YORK) — Before children explore the world on foot, they explore it with their five senses.Early development often includes children listening, looking, touching, smelling and tasting their way through their surroundings. The mouth is one of the first body parts that babies have control of, and anything that they can see and touch is often something they can sink their teeth — or gums — into. Unfortunately, this newfound eagerness for discovery is often accompanied by the hazard of accidentally swallowing objects and potential choking.A new study in the journal Pediatrics, by researchers at Nationwide Children’s Hospital in Columbus, Ohio, found the number of ER visits by children younger than 6 who accidentally swallowed objects nearly doubled between 1995 and 2015. “This means an average of 99 children per day are going to emergency departments for foreign body ingestion,” Dr. Danielle Orsagh-Yentis, a pediatric gastroenterologist and primary author of the study, told ABC News.The study found the most common objects ingested were coins, specifically pennies and quarters. The other most likely objects were small toys, jewelry and so-called button batteries.Dr. Orsagh-Yentis attributes this rise in hospital visits to the increased availability of easily swallowed objects in households despite stricter choking hazard regulations.”Button batteries,” she told ABC News, “are in things like watches, hearing aids, small remotes, and in toys. The relative availability of these and other objects has increased since 1995.”While most kids who swallow objects have few or no symptoms, swallowing any object has the ability to cause difficulty breathing or choking. Certain objects such as batteries and magnets pose the greatest risk when swallowed, since they could potentially cause burns or tear the lining of the esophagus, stomach or intestine.”What is of paramount importance is practicing safe storage” said Dr. Orsagh-Yentis, who recommends that any small objects be stored and locked at an elevated level. “If children can’t see them, they can’t be enticed by them.” The following are some ways to prevent accidental object ingestion in kids:

Put yourself in their shoes. Get down on all fours so you can see what your child sees in nooks and crannies that you otherwise may not see while standing. You’ll also be able to tell which drawers, cabinets or trash containers they are able to open from that level.

Store small objects in closed containers, out of reach and locked away. Even though some containers and most prescription bottles are made to be childproof, never underestimate a curious child. The key is out of sight, out of reach, out of mouth.

Keep your guard up. Kids can be speedy, and it sometimes takes just a few seconds for them to swallow something they shouldn’t. While it’s virtually impossible to keep them away from every single object they might accidentally swallow, close supervision can help prevent many of these accidents from happening.

Experts call for climate change debate to move beyond settled science and focus on action
Bill aims to prohibit discrimination in financial services for first time
Dolly Parton teams up with other artists for song to support fight to end breast cancer
Coronavirus live updates: Belgium’s foreign minister admitted to ICU for COVID-19
NASA astronaut has a message for Latinx STEM students: ‘We need you’
Jared Leto returns as the Joker for Zack Snyder’s ‘Justice League’