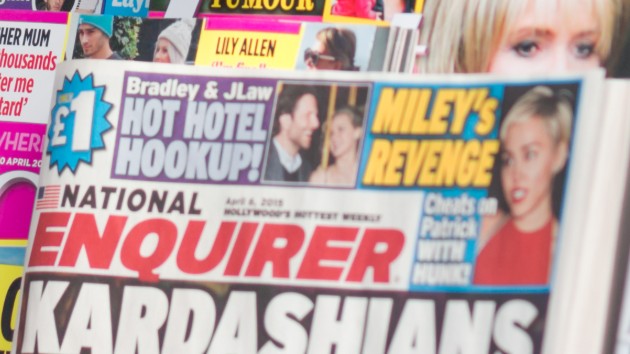 (NEW YORK) — American Media Inc. announced Wednesday that it plans to sell the National Enquirer along with two other tabloids.The New York City-based publishing company said in a statement its board had concluded a months-long review of its tabloid business, leading to the decision “to explore strategic options” for the U.S. and U.K. editions of its National Enquirer, as well as its Globe and National Examiner publications. “We have been keenly focused on leveraging the popularity of our celebrity glossy, teen and active lifestyle brands while developing new and robust platforms including broadcast and audio programming, and a live events business, that now deliver significant revenue streams,” AMI CEO David Pecker said in a statement Wednesday. “Because of this focus, we feel the future opportunities with the tabloids can be best exploited by a different ownership.”The decision follows accusations of extortion and blackmail made by Amazon CEO Jeff Bezos after the National Enquirer revealed on its front page he was having an extramarital affair with former TV news anchor Lauren Sanchez, publishing intimate text messages and nude photos.Elkan Abramowitz, an attorney who represents Pecker, defended AMI’s chief executive and denied the allegations in a Feb. 10 interview with ABC News Chief Anchor George Stephanopoulos on This Week.”It absolutely is not extortion and not blackmail,” Abramowitz said. “The story was given to The National Enquirer by a reliable source that had been giving information to the National Enquirer for seven years prior to this story. It was a source that was well known to both Mr. Bezos and Miss Sanchez.”AMI was granted immunity from the U.S. Attorney’s Office by the Southern District of New York last December as part of a probe into President Donald Trump’s former personal attorney and longtime fixer, Michael Cohen.Former Playboy Playmate Karen McDougal signed a $150,000 deal with AMI in August 2016, giving the publisher the exclusive rights to her first-hand account of an alleged 10-month affair with Trump in 2006.McDougal claimed that AMI worked secretly with Cohen as well as her own attorney at the time to buy her silence after Trump became the Republican presidential nominee in 2016.Federal prosecutors are now reviewing whether Bezos’s accusations amount to a violation of that non-prosecution agreement, which required AMI to “commit no crime whatsoever” for three years, a source familiar with the matter told ABC News in February.AMI said its board is conducting an internal investigation into Bezos’s claims and “will take whatever appropriate action is necessary.” Copyright © 2019, ABC Radio. All rights reserved.