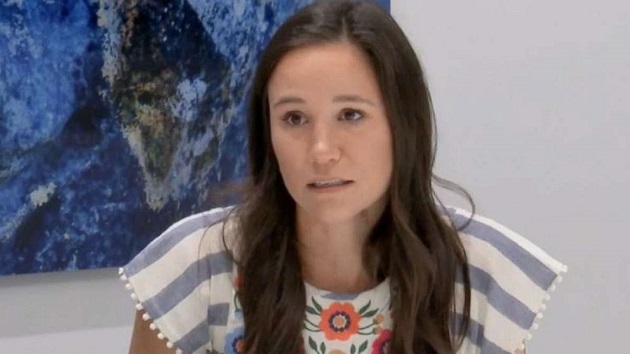 (HOUSTON) — Beware of the T-shirt cannon, according to a Houston Astros fan.Jennifer Harughty, a Montgomery County, Texas, resident, filed suit against the Astros on Monday claiming that a T-shirt fired into the crowd at a game last July irreparably injured her left index finger. The woman is asking for $1 million in damages.Harughty was sitting in the third-base stands, about halfway up the first deck, at a game against the White Sox on July 8, when the team’s mascot, Orbit, launched a T-shirt from close range that smashed into her hand and fractured her finger.”At first I was like, ‘Oh gosh, that really hurt,"” Harughty told Houston ABC station KTRK-TV in an interview. “But it was a T-shirt, surely it didn’t do any damage. I’m sure it’s jammed.””As the rest of the game went on, I told my husband, ‘I think something’s really wrong with it,"” she continued.She went to the emergency room after the game where she was told her finger “was severely fractured and would require surgery to reconstruct it,” according to the lawsuit. Four days after the incident, she had surgery to place two screws in the finger. But even after months of physical therapy she continued to “suffer pain, swelling and loss of range of motion.”The woman underwent a second surgery in October “to increase the possibility of Harughty regaining some use of her finger,” the lawsuit states.The lawsuit outlines eight different areas in which the Astros were allegedly negligent, including failure to use “reasonable care” in firing the T-shirt cannon, failure to provide warnings about the possible harm from the cannon, failure to properly supervise staff and failing to minimize or eliminate the danger from the T-shirt cannon.”It was a life-changing event that I think if it happened to anybody else … they would feel the same way,” Harughty said. “It has nothing to do with the Astros.”The Astros responded that they “do not agree” with the allegations, and even went one step further to say they won’t be stopping the promotion.”The Astros are aware of the lawsuit with allegations regarding Orbit’s t-shirt launcher. We do not agree with the allegations,” the organization said in a statement. “The Astros will continue to use fan popular t-shirt launchers during games. As this is an ongoing legal matter, we will have no further comment on this matter.”Harughty said the two surgeries have cost her over $15,000 in medical bills. She initially went to the Astros asking for compensation, but her lawyer said the team refused to provide any help.”I have a quiet life. It was an unfortunate incident, and we were just asking for some compensation for medical bills,” a tearful Harughty said. “I’ve never sued anybody in my life.”In addition to the medical costs, the lawsuit also says she deserves compensation for mental anguish, loss of opportunity and loss of enjoyment of life.”The damages that she has suffered are in excess of $1 million,” her lawyer, Jason Gibson, said. “And so the fact that we were forced to file this lawsuit, you have to put what you think the case is worth.”