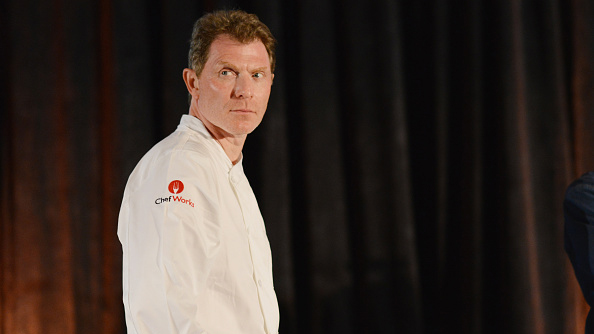 (NEW YORK) — Bobby Flay is one of the biggest names in the culinary world. He built his distinguished reputation by starring in several cooking shows and creating many well-known restaurants across the nation.The celebrity chef’s latest business venture, Shark, at the Palms Casino Resort in Las Vegas, officially opened this weekend and marks Flay’s first time experimenting with a seafood restaurant. He said he is “very, very excited” about the big moment.”Some people say to me, ‘Why are you opening another restaurant? You don’t have to do this.’ Well, I do because I want to,” he said in an interview with “Good Morning America.” “It’s the thing that makes me get excited about waking up in the morning; being able to come here, cook, create a new concept, train new staff, inspire younger people to do the same thing that I’m doing and, of course, ultimately making the customers happy.”That excitement is how he’s built his career and one of the factors he attributes his success to.”This is something I talk to my daughter — who’s now 22 years old — about is that work ethic is really the most important thing,” he said. “Not every day that you go to work is magic going to happen, but if you continue to go and try to make whatever you’re doing better each day, ultimately I don’t think you can lose.”Flay says his work ethic has always been “pretty robust.””I dropped out of high school, so I’ve always learned what life has given me and what’s in front of me,” he said. “I make decisions based on moments not based on long-term analysis.”Being part of the intersection of food and media is another factor he says helped him build his career.”Before I started cooking professionally, there was no Food Network or anything like that. Media and food had nothing to do with each other. Clearly, that’s changed, and I’ve been part of that growth,” he said. “A little bit has to do with the fact that I was in the right place at the right time.”Flay’s foray into seafoodShark, which has been a few years in the making, according to Flay, is named after an art piece that’s part of the casino’s $690 million remodel.”The original broad idea was to have a seafood restaurant, a fish restaurant,” Flay said. “There’s a lot of contemporary art, and it was explained to me that when you walk into the hotel the very center bar is going to have a Damien Hirst shark over it, and I knew what that looked like because they had commissioned it.””When I was thinking about a name for my fish restaurant, I was like ‘I’m going to call it Shark, based on that,” he added. “I always look for moments of fate of some sort to help name restaurants because it’s really hard to name restaurants.”He said that Shark, which is part of the Palms’ new restaurant collection, relates to his other joints in that it sticks to his love of big flavors on the menu.”I use a lots of different chili peppers in my food to really spark the dishes, and in this particular case I took a cue from a lot of ingredients from South America because I knew I wanted to have a sushi-sashimi concept in it as well,” he said.”There’s a big Japanese community in Peru, so they utilize a lot of chili peppers in their cuisine over there, and I knew that I wanted to utilize those in the cooked food and also raw food,” he added.The restaurant adds to Flay’s long list of businesses, and the chef says he doesn’t have any desire to slow down.At the heart of it, he believes he thrives with his businesses because he stays true to his roots.”I’ve always really stayed focused as to what I am, which is a cook,” he said. “I’m a through and through, my fundamentals of what I do is I cook every day, whether it’s in my restaurants, on my television shows or in my homes, I’m always cooking, so I never get blinded by the bright lights. That’s just, to me, sort of a sideline. It kind of just happens on its own.””The most important thing is that I make the food good, no matter where I am,” he added.5 questions with FlaySince Flay is no stranger to competition, starring on “Beat Bobby Flay” on the Food Network, we decided to put him up to a challenge of our own. We asked him some burning quick-fire questions we’ve been dying to know! Check out what he had to share:Favorite dish you’ve ever cooked?“I have a dish at Mesa Grill, my first restaurant that I owned and there’s still one in Las Vegas here at Caesars Palace, the shrimp and roasted garlic tamale. It’s the most signature dish that I have.”Last meal you would eat before you die?“Cheeseburger with two slices of American cheese and a giant ice cream sundae.”Would you cook it yourself?“No!”Favorite city to eat in?“I’m a native New Yorker. I think the best food in the world is in New York City. That would create a debate with lots of people, but I just think that you can go to Italy and find the best Italian food there, you can go to Paris and find the best French food in France, but if you want great French food, Italian food, seafood, steaks, Greek, Middle Eastern, you name it — New York has it.”Who is one celebrity chef that hasn’t cooked for you that you would like to?“I want Gordon Ramsay to cook for me, and I want to tell him exactly how I want it cooked.”