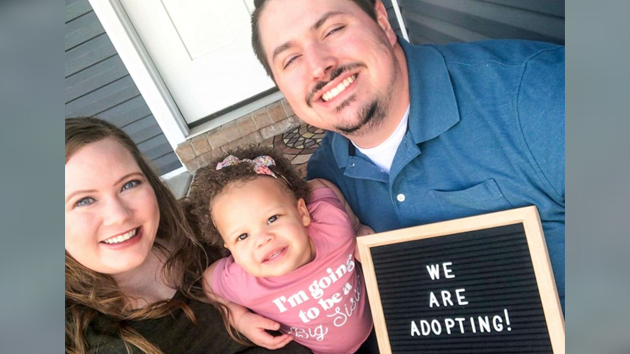 (MANCHESTER, Tenn.) — A couple hoping for a second child are playing Easter Bunny this year to fundraise an adoption.Josh and Blakeley Drake of Manchester, Tennessee, are offering to plant Easter eggs in the backyards of local families. In return, they’re accepting donations from people in their neighborhood.”Adopting another child, it’s everything,” Blakeley Drake, 27, told “Good Morning America.” “We never thought we were going to be able to have children and to be chosen by someone to parent their child is the biggest blessing that I think that you can have.”Josh and Blakeley Drake were married in 2011. Shortly after, Blakeley Drake was diagnosed with polycystic ovary syndrome (PCOS).The couple underwent fertility treatments but Blakeley Drake had two miscarriages. The Drakes ultimately decided to adopt, welcoming daughter Delaney, who is now 2.The Drakes were self-matched with Delaney’s birth parents, who were acquaintances of the couple. Because of the connection, the Drakes were able to forgo any adoption agency fees, Blakeley Drake said.”We were hoping to do that again but if we’re not, we have a little bit better of what the cost is going to be–we are looking at $25,000 to $35,000,” Blakeley Drake said.Now, the Drakes are hoping for a second child but instead of crowdsourcing, they decided to give back to their community in exchange for those donations.The Drakes posted a flyer on Facebook advertising their adoption fundraiser which is titled, “Egg My Yard.”For two nights before Easter, they’ll hide candy-filled eggs in the yards of families who have signed up for an “egging.” The cost ranges from $30 to $70 depending on the amount of eggs and parents can customize the hunt based on allergies and level of difficulty in an online survey, Blakeley Drake said.Each egg hunt will include a note left on one’s door from the Easter bunny. So far, the Drakes have had 25 families sign up.Ashlyn Allen is one parent who has signed up for the Drakes’ egg hunt.”I love that they’re providing an actual service in order to raise money for the adoption,” Allen told “GMA.” “I’m happy to play a small role in this adoption process.”Blakeley Drake said she’s excited to plant the eggs with her husband and toddler.”We’ll make it magical for kids and take a little pressure off the parents too,” she said. “Our daughter is the light of our lives. We know she’s going to be a great big sister.”

United to test all passengers for COVID-19 on select London flights
Kelly Ripa and Ryan Seacrest to give away $10,000 in prizes for virtual Halloween costume contest
Mariska Hargitay brings cookies to New Yorkers waiting in line to vote: “It was the least I could do”
Food manufacturers increase production to avoid grocery shortages
Coronavirus live updates: El Paso hospitals setting up tents to deal with influx of COVID-19 patients
How will a COVID vaccine be distributed once it’s approved by FDA?