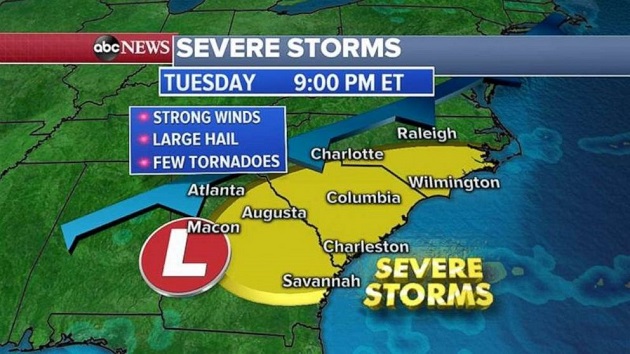 (NEW YORK) — Severe storms moved through the eastern U.S. Monday, from Florida to Maryland, delivering baseball-sized hail and winds of more than 60 mph.Meanwhile, a tornado was spotted in northern Alabama on Monday morning, as potential isolated tornadoes, large hail and damaging winds remain a threat Tuesday in the South and Southeast.The central part of the country is bracing for a major storm on Wednesday.The storm system just moved through the Pacific Northwest, which saw record rainfall and flooding in parts of Oregon, including Eugene, which had its wettest April day ever on Sunday.As this storm gets even stronger while marching east, 10 states from Utah to Michigan are on alert for heavy snow and blizzards.Massive snowfalls are possible in the Rockies as the storm heads east before reemerging in the Plains, with severe storms likely in Nebraska, Kansas and Iowa.By Thursday, the storm is expected to explode in the Plains, with blizzard conditions developing from Nebraska to Minnesota. Parts of the Plains may see 2 feet of snow this week.South of there, severe storms will strike the Midwest and southern Great Lakes area.Copyright © 2019, ABC Radio. All rights reserved.

All travelers to New York must test negative for COVID-19, Cuomo announces
Republicans prepare for post-Election Day legal fights in battleground states
US produced more plastic waste in 1 year than any other country on Earth: Study
Halloween inspo: Mindy Kaling dresses up as Devi from her show ‘Never Have I Ever’
Lori Loughlin reports to prison to serve two months for college admissions scheme
Jeff Bridges shares photo from cancer treatment, thanks fans for well wishes