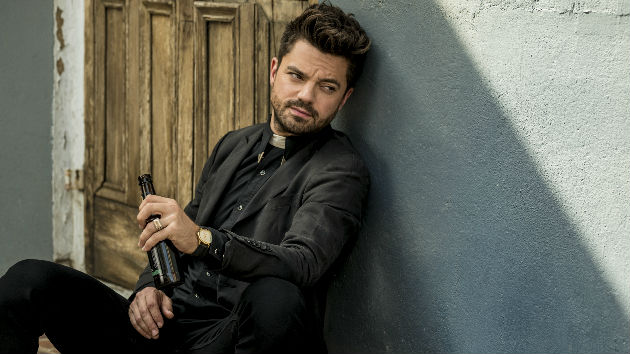 (NEW YORK) — There’s good news and bad news for a couple of popular AMC shows: On the heels of its season two premiere on Sunday, the dark comedy Killing Eve — starring Sandra Oh and Jodie Comer — has been renewed for a third season. Killing Eve airs Sundays at 8 p.m. ET.

On the flipside, Preacher, the series from Seth Rogen and Evan Goldberg that’s based on the cult comic book franchise, will end its run with its upcoming fourth season. The quirky show stars Dominic Cooper as the titular character, a former criminal-turned reluctant man of the cloth who inherits the voice of God; Ruth Negga stars as his unflappable partner Tulip, and Joe Gilgun plays their bestie, a drugging, boozing Irish vampire. On their tails as they trek across the country are no less than the forces of hell, and a shadowy army of Vatican-linked enforcers.

Rogen made the announcement on his official Instagram page Monday, writing “The fourth and final season of Preacher is coming. It’s been a wild ride. Thank you all.” A clip accompanying the post revealed that the final season will premiere August 4.

A Tuesday deadline for pandemic relief deal but prospects dim
Election 2020: Why voting in the coronavirus pandemic will be unlike any other year
Michael B. Jordan is helping expand a “new universe” for Black superheroes
Fighting back against pandemic, AMC offering theater rentals for $99
Mother missing for 12 days in Zion National Park found safe
12-year-old shot and killed in front of family while working in yard