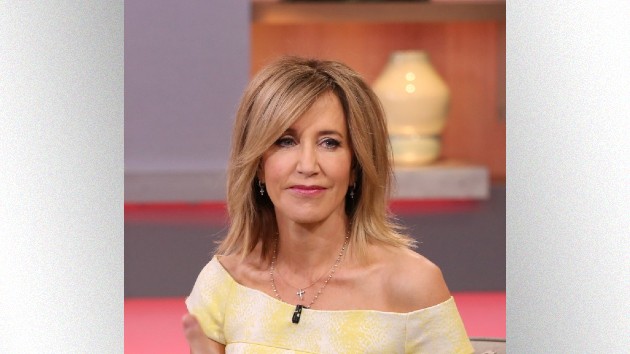 (BOSTON) — Former Desperate Housewives star Felicity Huffman is among 14 defendants who have agreed to plead guilty in the “Varsity Blues” college admissions scam that rocked elite schools this spring.Huffman, 56, and the other defendants will each plead guilty in U.S. District Court in Boston to a charge of conspiracy to commit mail fraud and honest services mail fraud, federal prosecutors said Monday.

She faces a maximum sentence of 20 years in prison, three years probation and a $250,000 fine, based on the prosecutors’ recommendation.  The actress has also released a statement saying she is “ashamed of the pain” she has caused her family.”I am in full acceptance of my guilt, and with deep regret and shame over what I have done, I accept full responsibility for my actions and will accept the consequences that stem from those action,”she said in the statement.

The actress, who was Oscar-nominated for her role in the movie Transamerica, allegedly gave $15,000 to William “Rick” Singer, who prosecutors identified as the ringleader of the nationwide scam, “to participate in the college entrance exam cheating scheme on behalf of their oldest daughter,” court documents allege.Huffman and her husband, actor William H. Macy, later made arrangements to pursue the scheme a second time for her younger daughter, before deciding not to do so,” court documents allege. Macy was not charged in the scam.”I am ashamed of the pain I have caused my daughter, my family, my friends, my colleagues and the educational community. I want to apologize to them and, especially, I want to apologize to the students who work hard every day to get into college, and to their parents who make tremendous sacrifices to support their children and do so honestly,” Huffman said in her statement.”My daughter knew absolutely nothing about my actions, and in my misguided and profoundly wrong way, I have betrayed her,” she said. “This transgression toward her and the public I will carry for the rest of my life. My desire to help my daughter is no excuse to break the law or engage in dishonesty.”Plea hearings for the defendants have yet to be scheduled.