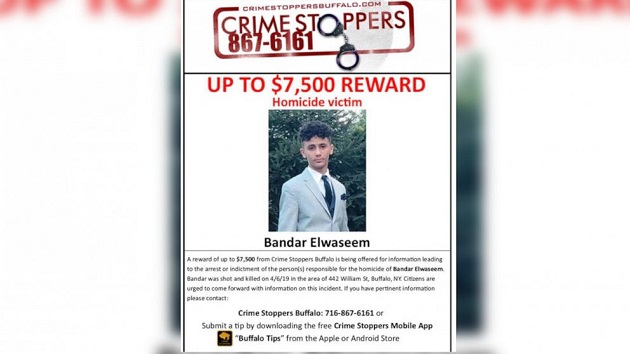 (BUFFALO, N.Y.) — A 12-year-old Buffalo, New York boy who was inside his own home was fatally shot in the head by a stray bullet Saturday night, police said.Bandar Elwaseem was inside his apartment around 8:30 p.m. when he was shot, Buffalo police said Sunday. The bullet that struck Bandar traveled “a considerable distance,” police said. He was in the kitchen when he was shot, according to ABC Buffalo affiliate WKBW-TV.Another person, a 22-year-old man, was also struck by a gunshot and is in stable condition following surgery, officials said.Investigators believe the shooting originated in the parking area of the Town Gardens Plaza based on the direction of the shots and where Bandar’s home is located, police said.Shots were being fired at a car in the parking lot, WKBW reported.Police are canvassing for camera footage in the area and talking to witnesses. It is unclear if there is more than one suspect.Crimestoppers is offering a $7,500 reward and the FBI is offering an additional $5,000 for any information leading to an arrest.Anyone with information is asked to call Crimestoppers Buffalo at 716-867-6161.Copyright © 2019, ABC Radio. All rights reserved.