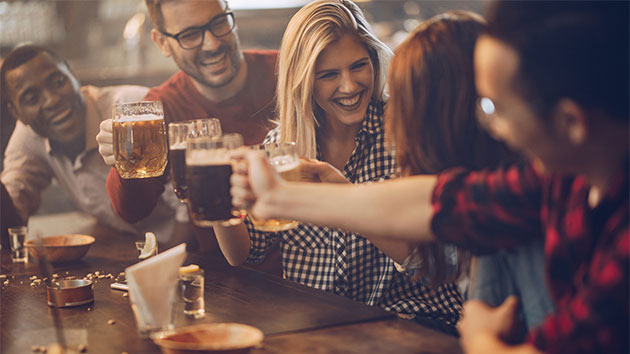 (NEW YORK) — While it’s well known that drinking too much alcohol can cause both physical and psychological damage, the pros and cons of moderate alcohol use are still heavily debated, with the latest study on the subject finding that moderate drinking can increase a person’s risk of stroke.

The study, published in The Lancet, counters the findings of some previous studies that have shown links between moderate alcohol intake and heart disease, high blood pressure, diabetes and certain types of cancer.

It found that among 500,000 men and women in China, those who drank alcohol at moderate levels were more likely to have high blood pressure and an increased risk of stroke. The researchers didn’t find a link between alcohol use and heart attacks.

Moderate drinking is considered to be up to two drinks per day for men and one drink per day for women, according to the Centers for Disease Control and Prevention. The standard drink in the United States is equal to about one 5-ounce glass of wine, one 12-ounce can of beer, or one 1.5-ounce shot of hard liquor, according to the USDA.

For the study, each participant reported their drinking habits and about a third had their DNA tested to see if they had genes for processing alcohol, which made them more prone to drinking. The gene tests also allowed researchers to rule out other reasons as the cause of the high blood pressure and increased risk of stroke.

These methods allowed the team to identify causal effects from the alcohol, Dr. Ionis Millwood, senior epidemiologist at the University of Oxford and co-author of the study, told ABC News.

That said, there were some limitations with the study. For example, the majority of the people included in the study drank mostly hard liquor rather than beer or wine — the two kinds of alcohol that have studies have linked to health benefits, with wine having the strongest evidence.

While the USDA recommends those who drink alcohol to limit their intake to moderate levels, the study shows that alcohol consumers should be cautious, as the evidence continues to remain uncertain.

Charlyn Laserna is a pediatric resident physician at The University of Texas Health Science Center at Houston and a contributor to the ABC News Medical Unit.

Hello again, Clarice! Jodie Foster and Anthony Hopkins reunite to celebrate ‘Silence of the Lambs” 30th anniversary
Democrats plan to launch impeachment trial by end of week, sources say
Biden’s pick for secretary of state lays out vision
Vin Diesel marks 20 years of ‘The Fast and the Furious’
The inequities of PPP: Megachurches, large corporations receive money ahead of small businesses
Biden to pitch an eight-year pathway to citizenship in day one immigration reform bill