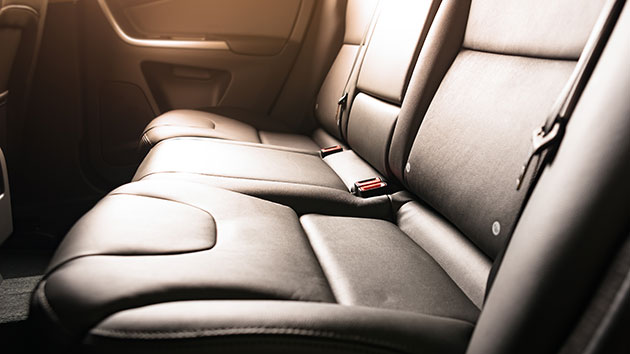 (NEW YORK) — Your next car purchase may come with this disclaimer: No cows were used in the manufacturing of this vehicle.Leather has long been viewed as the superior choice in automobiles, especially in the luxury segment. Now, some automakers are taking consumers’ concerns about sustainability and animal welfare seriously. A growing number are shunning animal leather altogether or charging customers thousands of dollars more if they prefer cow hides on their steering wheels and seats.Marc Lichte, head of design at Audi, said “vegan leather,” as the German luxury automaker calls it, is a big selling point for customers. Two new Audi concepts — the e-tron GT and e-tron Q4 — will be “animal-free.” Synthetic leather will replace traditional animal leather, and the cushions, armrests, headliner, window trims and center console will be produced with recycled materials, Audi said.Even the vehicles’ floor carpets — made from old fishing nets and plastic bottles — are sustainable.Lichte’s two teen daughters, who are vegetarian, may have played a factor in Audi’s decision to change its practices.“They said to me, ‘I don’t want to sit on a dead cow,’” Lichte told ABC News last month in Geneva.Car shoppers can soon expect to see the “vegan leather” option in other Audi vehicles, a spokeswoman said.Mark Takahashi, senior reviews editor at Edmunds, said non-animal fabrics in vehicles aren’t necessarily a new phenomenon.“What’s new is the branding,” he told ABC News. “It was never called ‘vegan leather’ until very recently.”Cars in the 1950s featured a leather substitute called Naugahyde, a material that looked and felt like vinyl, Takahashi pointed out. The nickname “pleather” quickly caught on with consumers even as automakers tried to distance themselves from the sobriquet.“It has a negative connotation,” Takahashi said, saying it can be seen as a “cheaper substitute.”Luxury automakers in particular are embracing the vegan trend. Tesla stopped upholstering the seats of its electric vehicles with animal leather in 2017.Polestar, the high performance brand from Volvo, decided to manufacture its all-electric Polestar 2 fastback with WeaveTech, a “high-end, non-animal based, leather-free, vegan friendly material,” according to a spokesperson. The company, however, does offer Nappa leather — made from animals — if a customer wants it. Polestar 1, the company’s plug-in hybrid, does not have the WeaveTech option.BMW has offered a leather substitute, referred to as “leatherette” or “vinyl” by employees, since 1975.In 2014, the company changed the name to SensaTec to “reflect the more upscale design and feel of the materials,” according to BMW spokesman Oleg Satanovsky.SensaTec, which comes standard on 11 BMW vehicle lines — including the 2 Series, 3 Series, 5 Series, X2, X3 and X4 — is a recycled blend of wool and other materials that’s dyed with plant-based coloring. Satanovsky said one of the main advantages of SensaTec is its durability.“It is not decomposed by sunlight and it cannot be harmed by air or (even salty sea) water,” he told ABC News in an email. “It’s more resistant to wear and staining than leather and is easier to clean.”BMW customers who buy or lease a model where SensaTec is standard can pay an additional $1,450 to $2,450 to “upgrade” to leather; the price depends on the vehicle and type of leather. BMW’s 6 Series, 7 Series, i8 sports car and M Series vehicles do not offer SensaTec.The company has seen an increase of requests from customers for SensaTec, according to Satanovsky.“Some choose it to specifically avoid having animal-sourced upholstery in their vehicles,” he said. “Many customers prefer SensaTec because it fits their lifestyle and needs better.”BMW’s i3 all-electric sedan goes even further in terms of sustainability. The door panels and dashboard of the i3 are made from renewable natural Kenaf plant fibers. The open-pore eucalyptus wood in the car is sourced from a Forest Stewardship Council-certified forestry, and the seat cloths are manufactured from 100 percent recycled polyester, according to BMW.Karl Brauer, executive publisher of Autotrader and Kelley Blue Book, said automakers are making a smart business decision by offering non-leather substitutes.“It can be done well and is shockingly good,” he told ABC News. “It’s an interesting alternative, and there’s more awareness by consumers about animal treatment.”But Brauer cautioned automakers not to make assumptions about customers who choose hybrids and electric cars.“It’s a leap, in my opinion, to assume that because I drive an alternative [vehicle] that I would want non-leather,” he said.Vegan leathers and recycled interiors won’t appeal to all motorists, Takahashi said.“But if you’re a real authentic vegan, you are going to seek out a car with no leather,” he noted.Part of the decision to embrace the vegan lifestyle may simply be the cost.“It’s a decent-enough savings for automakers by using non-leather,” Takahashi said. “It takes a lot of resources to put together these full-leather interiors.”Some automakers are eager to tout their lavish use of leather. Super premium brands such as Bentley, Aston Martin and Rolls-Royce make it a point to explain the origins of their leather and the extensive quality controls employed to ensure the hides are flawless.The seats in Rolls-Royces are swaddled in hides from the Simmental breed, according to the company. These cows are raised in a temperate climate and “live freely,” Rolls-Royce states on its website. “Their welfare is fundamental to the quality of their hides.”Moreover, each hide is “rigorously scrutinized for imperfections, and only the finest make it” to the company’s factory in Goodwood, England.The vegan leather trend may not infiltrate the entire automotive segment, but with an increasing number of consumers conscious of industry practices, Takahashi and Brauer expect more automakers to rethink their ways.Plus, “these non-leathers are very convincing,” said Takahashi. “It’s hard to tell the difference between leather and vegan leather.”Copyright © 2019, ABC Radio. All rights reserved.

Why Joe Biden’s inauguration will be like no other — and how to watch
Anthony Mackie and Damson Idris explain why previous roles didn’t influence their ‘Outside the Wire’ characters
Hospitals, businesses are offering incentives to those hesitant about getting COVID-19 vaccines
Here are all of the House Republicans who voted to impeach Donald Trump
Betting site taking wagers on why Kim Cattrall’s Samantha isn’t in ‘Sex and the City’ revival
Why AOC says she didn’t feel safe around her colleagues during Capitol riot