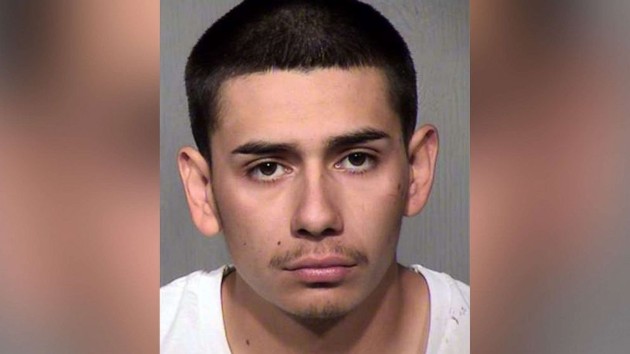 (PHOENIX) — A 20-year-old man has been arrested for allegedly gunning down a 10-year-old girl in what police called an apparent road rage killing, authorities said. Joshua Gonzalez was booked on one count of first-degree murder and three counts of aggravated assault in connection with the slaying of 10-year-old Summerbell Brown, Phoenix police announced Friday.Gonzalez has an extensive criminal history, Phoenix Police Sgt. Vince Lewis said at a news conference.A composite sketch of the suspect and images of his truck were circulated on Thursday before the arrest. A tip led investigators to Gonzalez, police said. The truck and weapon believed to be involved in the shooting were also recovered. The suspect “did try to alter the truck’s appearance,” Phoenix Police Chief Jeri Williams said.The shooting unfolded at about 5:45 p.m. Wednesday, when 10-year-old Summerbell was in the car with her sister and parents on their way home, according to police.The suspect’s white truck cut off the Browns in traffic, Lewis said. Then the truck followed the family’s car very closely, Lewis said. “As soon as the truck was behind the victim, he stayed relatively close, as if he was intentionally following the victim,” Lewis said. As the family turned into their driveway, the truck stopped behind them, Lewis said. “I got out of my vehicle,” Summerbell’s father, Dharquintium Brown, later told reporters. “I asked him, ‘What’s going on?’ And he just got to firing.”The suspect, who never exited his car during the shooting, fled the scene. Summerbell, who had been sitting directly behind her father, was shot and pronounced dead at the hospital, police said. Dharquintium Brown on Thursday told reporters he “watched her eyes roll in the back of her head. And I pray nobody has to experience that.” “She died in front of me,” he said. Dharquintium Brown was also shot and suffered a non-life-threatening injury, police said. Summerbell’s mother and sister were not hurt.Phoenix Mayor Kate Gallego on Friday called the killing a “senseless tragedy.” “This is heartbreaking … that I lost my baby like this,” Summerbell’s mother, Taniesha Brown, told reporters Thursday, overcome with emotion. “There was no reason for her to be taken like this. I wish it was me instead of my baby,” Taniesha Brown said. “This nightmare’s going to be playing in my head every day,” she said. “I just really hope she’s at peace.” Lewis said the suspect and victims likely did not know each other.