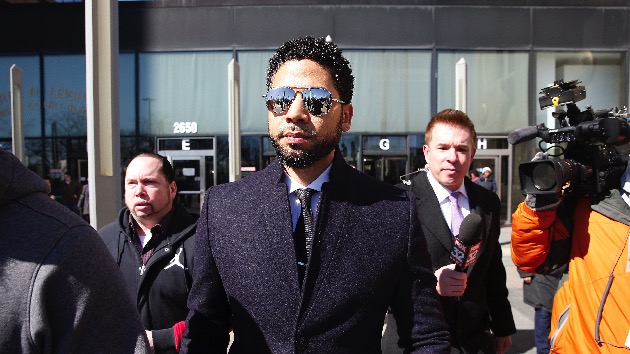 (CHICAGO) — Two days after prosecutors in Chicago unexpectedly dropped all charges against Jussie Smollett, city officials gave the Empire actor a week to pay back $130,000 used to investigate a hate crime in January that officials said was bogus.Smollett missed the deadline, and he’s about to be sued.Bill McCaffrey, a spokesperson for the city’s Department of Law, said in a statement Thursday night: “Mr. Smollett has refused to reimburse the City of Chicago for the cost of police overtime spent investigating his false police report on January 29, 2019. The Law Department is now drafting a civil complaint that will be filed in the Circuit Court of Cook Country.”The lawsuit will be filed “in the near future” and the city “will pursue the full measure of damages allowed under the ordinance,” McCaffrey concluded.Chicago has asked Smollett, against whom 16 felony charges had been filed, for an “immediate payment” of $130,106.15 “in an attempt to resolve this matter without further legal action,” according to a letter obtained last week by ABC News. The letter asked for the payment within seven days and said additional fines were possible.Smollett, who insists he’s been “truthful and consistent on every single level since day one,” was released after forfeiting $10,000 — 10% of his $100,000 bond — and performing a few hours of community service.Joe Magats, the first assistant state attorney in Illinois, told ABC Chicago station WLS, “We stand behind the investigation and the facts revealed,” and, “We believe he did what he was charged with doing,” and, “This was not an exoneration. To say that he was exonerated by us or anyone is not true.”Chicago Mayor Rahm Emanuel said dropping the charges against Smollett “is without a doubt a whitewash of justice.”A federal investigation into a threatening letter investigators say was part of the hoax is still underway.Empire is produced by 21st Century Fox, now part of the Walt Disney Co., also the parent company of ABC News.Copyright © 2019, ABC Radio. All rights reserved.