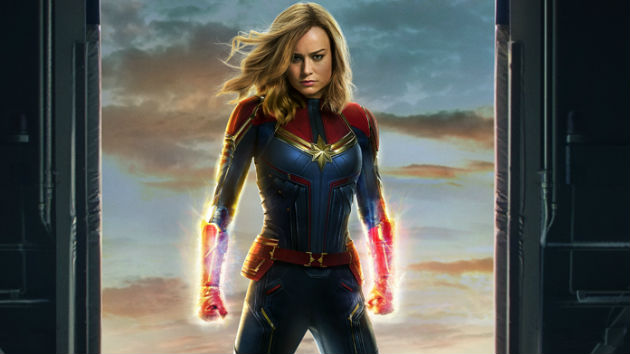 (LOS ANGELES) — Captain Marvel has officially become the latest film in the Marvel Cinematic Universe to cross the $1 billion plateau at the worldwide box office.

With earnings of $358 million in North America, and another $645 million overseas, the superhero film, starring Brie Larson, is now the seventh movie in the Marvel Cinematic Universe to cross the $1 billion mark, joining Avengers: Infinity War, Black Panther, The Avengers, Captain America: Civil War, Avengers: Age of Ultron, and Iron Man 3. Collectively, the 21 films in the MCU have delivered $18.5 billion to date.

Captain Marvel is also the first Marvel film to center around a female superhero. It’s success, and the success of DC’s Wonder Woman, are demonstrating the power of female superheroes at the box office. Their success also bodes well for Marvel’s upcoming Black Widow stand-alone movie, which stars Scarlett Johansson.

We won’t have to wait much longer to get our next glimpse of Captain Marvel — she’ll take her place alongside the rest of the Avengers in Avengers: Endgame, hitting theaters April 26.