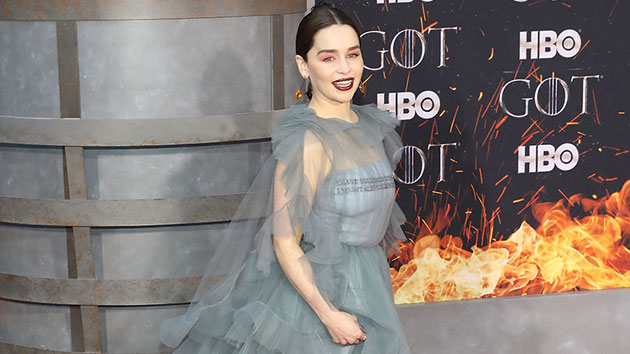 It was an emotional night for the cast, especially Sophie Turner, who plays Sansa Stark. However, on the red carpet beforehand, she said she came prepared: “I’ve got my waterproof mascara on, because I know there’ll be a lot of crying.”

It was more a feeling of anticipation for Charles Dance, who played Lannister family patriarch Tywin Lannister for the first four seasons, because “nobody’s given me even the slightest clue of what’s happened.”

Of course, one thing GoT fans have learned after seven seasons it to expect the unexpected, and Kristofer Hivju, who plays Tormund Giantsbane, says unpredictability has become a hallmark of the show.

“It’s like a sports event,” he explains. “You don’t know what’s gonna happen.”

Emilia Clarke, who portrays Queen Daenerys Targaryen, and Gwendoline Christie, who plays the knight Brienne of Tarth, each took took the opportunity to say how “proud” they were to have been a part of the show, with Christie noting she particularly enjoyed playing such a many-faceted character.

“She is not just incredibly physically strong and able and capable of fighting, but also she has an extremely strong moral sense.” says Christie, adding, “I have never played a hero before, and I have really loved it and I do hope to possibly play more.”

Maisie Williams, who plays Arya Stark, says GoT’s eighth and final season will go down as the toughest, saying she had an “insane amount of stunts to do.”

While all of the Game of Thrones principals were there, one star had to skip the fun.  Lena Headey, who plays the evil Queen Cersei Lannister, sent her regrets via Instagram, saying she was “gutted” and “heartbroken” she couldn’t attend because she was ill, but demanding that her fellow cast mates “RIDE FORTH INTO THE NIGHT AND CREATE MAYHEM.”

The eighth and final season of Game of Thrones debuts Sunday, April 14 on HBO.