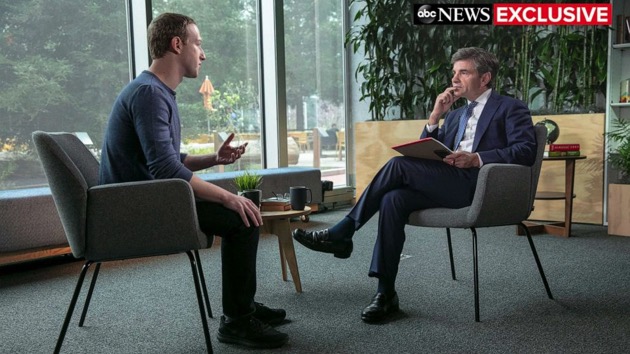 (MENLO PARK, Calif.) — Facebook CEO Mark Zuckerberg said the company is “looking into” a report that its users’ data is publicly available via Amazon Cloud Services.Researchers at cybersecurity firm UpGuard discovered millions of users’ Facebook information posted publicly on Amazon’s servers, Bloomberg reported on Wednesday.”I just saw that,” Zuckerberg told ABC News’ George Stephanopoulos. “So we’re still looking into this. In general, we work with developers to make sure that they’re respecting people’s information and using it in only ways that they want.”The full interview will air on Thursday’s Good Morning America.

In one instance, cybersecurity firm UpGuard found that digital platform Cultura Colectiva, stored “540 million records on Facebook users, including identification numbers, comments, reactions and account names. The records were accessible and downloadable for anyone who could find them online,” Bloomberg reported.”I think regulation would be helpful, where it would be useful to spell out clearly what the responsibilities that we want companies and people and governments to have. There are a lot of decisions that I just think people don’t want a single private company to be making,” Zuckerberg added.