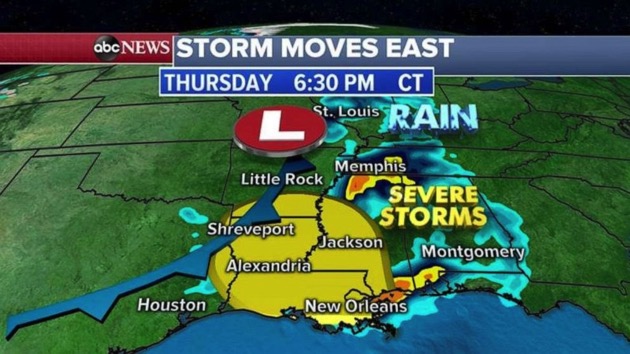 (NEW YORK) — A storm system that moved in from the west brought baseball-size hail to parts of Texas and Oklahoma on Wednesday.The storm system will move east into the Mississippi River Valley on Thursday with severe weather stretching from New Orleans to Jackson, Miss., and into Shreveport, La., and eastern Texas.The biggest threat with these storms will be damaging winds, huge hail and even a few tornadoes.The tornado threat is higher Thursday than it was Wednesday.The storm moves into the Northeast on Friday with heavy rain and even snow in the New England mountains.Washington, D.C., New York City, Philadelphia and Boston could get more than 1 inch of rain.Several storm systems will pound the West Coast through the weekend bringing moisture from an atmospheric river into California and Oregon.Rain and snow begins later Thursday and really picks up on Friday with heavy rain possible from Northern California into Oregon. Some flooding is possible.Some areas could see more than 5 inches of rain over the next several days, while 2 feet of snow is possible in California’s Sierra Nevada Mountains.Copyright © 2019, ABC Radio. All rights reserved.