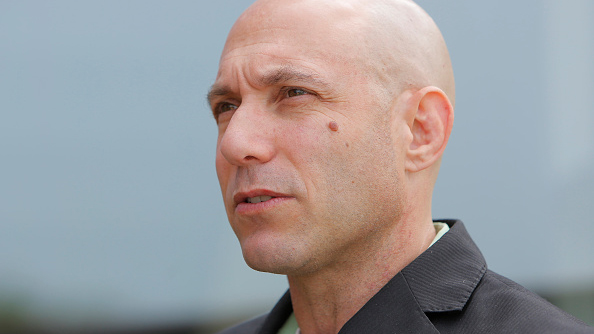 (BOSTON) — A stranger is running this month’s Boston Marathon to honor Jeremy Richman, the father of a Sandy Hook school shooting victim who died last week by apparent suicide.”I just want this to be in honor of Jeremy, in honor of Avielle, in honor of everybody that was effected at Sandy Hook and afterward,” Dan Friedman, 30, told ABC News. “And all the various kind of tragedies where people have suffered so senselessly.”Richman, father of 6-year-old Sandy Hook victim Avielle Richman, was found dead on March 25 from an apparent suicide, according to Newtown, Connecticut, police. He was 49.Avielle was among the 26 students and educators killed in the Dec. 2012 shooting at Newtown’s Sandy Hook Elementary School.Friedman, who works in sales and marketing in New York City, called the Sandy Hook massacre “a gut punch.””I can remember particularly being in the car with my dad that day. He was just silent. It just shook him to his core,” he said. “I don’t think that’s ever really left him.”The idea to run the marathon in Richman’s honor came from Friedman’s father, who is the head of sponsorship and event marketing at the John Hancock Life Insurance Company. His work includes negotiations with the Boston Athletic Association — the governing body of the Boston Marathon, Friedman said.The day of Richman’s death, the company had one charity bib left.With a charity bib, a participant does not have to qualify for the marathon the way competitive runners do, said Friedman.”A light bulb kind of went off in his head,” Friedman said of his father, who decided running in Richman’s honor would be “one small thing to continue the much larger mission that Jeremy and his family had started in the wake of the death of their daughter.”After Avielle’s murder, Richman, a neuro-pharmacologist, started a nonprofit, The Avielle Foundation, “to study the neuroscience, the underpinnings of violence and the risk factors.””We wanted to prevent others from suffering the way that we were suffering,” Richman said last year when he appeared on ABC News’ “10% Happier” podcast. “If there’s a hope that we can get somebody help before it’s another tragedy, then that would be everything.”Friedman, who is using his charity bib to raise money for The Avielle Foundation, said most of the donations are from people he doesn’t know.”We’re just blown away by the support,” Friedman said, adding that he doesn’t have a specific fundraising goal in mind.Friedman said Richman’s suicide “really puts into light the ripple effects of these tragedies,” including Parkland.In the days before Richman’s death, two survivors of the 2018 shooting at Marjory Stoneman Douglas High School in Parkland, Florida, died in apparent suicides.”We can’t just forget these things happen,” he said of mass shootings. “It just breaks your heart.”Friedman is prepared for the April 15 race — he’s run four marathons, most recently the 2017 Boston Marathon.But, he stressed that the race is “not about us… what we’re doing is one small gesture for a much larger and important goal.”Nick Hoffman, chief imagination officer at The Avielle Foundation, said in a statement Thursday, “Our mission has a dual objective, to prevent violence and build compassion. Dan’s effort isn’t simply a fundraiser it’s the embodiment of our mission. He’ll join thousands of runners from across the globe representing The Avielle Foundation, spreading our mission and vision and helping to pick us up in a time of need. With every stride, Dan will be building compassion.”After Richman’s death, The Avielle Foundation said in a statement: “We are crushed to pieces, but this important work will continue, because, as Jeremy would say, we have to.””Tragically, his death speaks to how insidious and formidable a challenge brain health can be and how critical it is for all of us to seek help for ourselves, our loved ones and anyone who we suspect may be in need,” the foundation said. “Jeremy’s mission will be carried on by the many who love him, including many who share the heartache and trauma that he has suffered since Dec.14, 2012.”Richman is survived his wife, Jennifer Hensel, and their two young children.If you are in crisis, please call the National Suicide Prevention Lifeline at 1-800-273-TALK (8255) or contact the Crisis Text Line by texting TALK to 741-741.