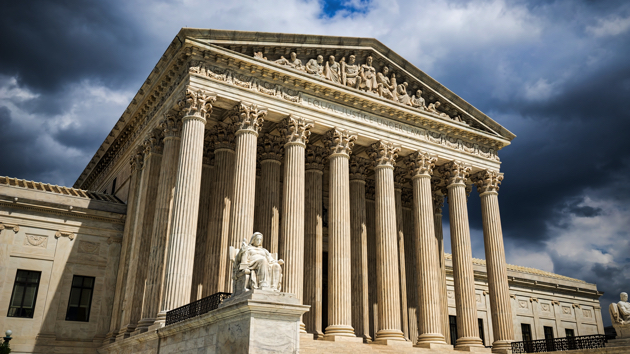 (WASHINGTON) — When does capital punishment become “cruel and unusual?”The Supreme Court this week, in a narrow 5-4 decision, offered a sweeping defense of the death penalty, including in cases when an inmate faces the risk of extreme pain.”The Eighth Amendment does not guarantee a prisoner a painless death,” Justice Neil Gorsuch wrote for the majority in the death row appeal by Missouri convict Russell Bucklew. The amendment prohibits the infliction of “cruel and unusual punishments.”Bucklew, 50, suffers from a rare condition known as cavernous hemangioma, which causes blood-filled tumors to grow on his head, face, neck and mouth. He claims a lethal injection of pentobarbital could burst the tumors, causing him to choke and suffocate on his own blood.He proposed an alternative method of execution by nitrogen gas, which has not been used in the state.”His main claim now was that he would experience pain during the period after the pentobarbital started to take effect but before it rendered him fully unconscious,” Gorsuch wrote. But, he also noted that the lower courts found Bucklew “produced no evidence that his proposed alternative … would significantly reduce the risk.”Gorsuch said unconstitutional punishments are those that “intensify the sentence of death with a (cruel) ‘superaddition’ of ‘terror, pain, or disgrace."” He ruled that Missouri’s plan to execute Bucklew with pentobarbital would not.Chief Justice John Roberts and Associate Justices Clarence Thomas, Samuel Alito and Brett Kavanaugh joined the majority opinion.”His suit in the end amounts to little more than an attack on settled precedent,” Gorsuch wrote.Bucklew was convicted in the 1996 kidnapping and rape of his ex-girlfriend; murder of her boyfriend; and shootout with police. He later escaped from jail while awaiting trial and attacked his ex-girlfriend’s mother with a hammer.His decades-long legal appeals have not challenged his conviction or the constitutionality of the death sentence itself. Rather, Bucklew contends the type of drug Missouri uses for executions would cause him unreasonable pain.Missouri is one of 30 states with the death penalty. Hanging was the primary method of execution in the state until 1936 when lethal gas was added as an option, according to the Death Penalty Information Center. In 1987, the state adopted lethal injection.”The experts dispute whether Bucklew’s execution will prove as unusually painful as he claims,” Justice Stephen Breyer wrote in a dissenting opinion, “but resolution of that dispute is a matter for trial.””The question is not … whether a punishment is deliberately inflicted to cause unnecessary pain, but rather whether we would today consider the punishment to cause excessive suffering,” Breyer said.In a separate dissent opinion, Justice Sonia Sotomayor took issue with the language in Gorsuch’s opinion, warning against a rush to judgment in death penalty cases, which often get delayed for years by numerous appeals.”There are higher values than ensuring that executions run on time,” Sotomayor wrote. “If a death sentence of the manner in which it is carried out violates the Constitution, that stain can never come out. Our jurisprudence must remain one of vigilance and care, not one of dismissiveness.”Support for the death penalty remains near historic lows, according to recent public opinion polling.Roughly half of Americans — 54 percent — said they support the death penalty in a Pew Research poll released in June 2018. Thirty-nine percent said they were opposed.Three American inmates have been executed, by lethal injection, so far this year, according to the Death Penalty Information Center. In 2018, there were 25 executions nationwide.Copyright © 2019, ABC Radio. All rights reserved.

Coronavirus live updates: University of Michigan pauses all sports after positive tests
Turbulent week of weather ahead with 3 different storms tracking across US
Police, residents plead for ceasefire after South LA sees 59 shooting victims in 1st 2 weeks of 2021
Pastor says addressing resistance to Biden administration is part of the job
John Krasinski, Dan Levy, Regina King are the first ‘SNL’ hosts of 2021
Lawmakers outraged at images of National Guard sent from Capitol to parking garages