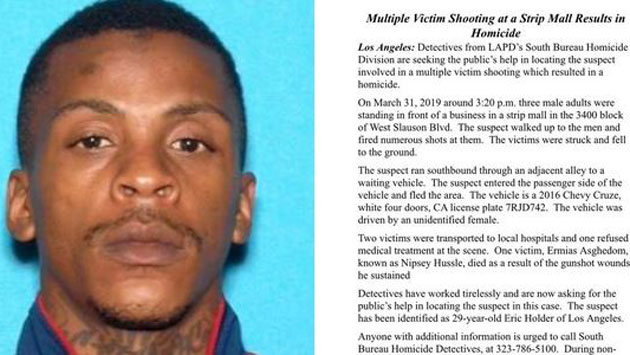 (LOS ANGELES) — The suspect in the fatal shooting of Grammy-nominated rapper Nipsey Hussle was captured Tuesday afternoon just hours after the Los Angeles police chief stared into a bank of TV news cameras and asked the alleged killer to give up.The suspect, Eric Holder, 29, was arrested in the L.A. suburb of Bellflower after police spotted him there and detained him without incident, officials said.Police used surveillance video and social media posts by witnesses to help identify the 29-year-old Holder as the alleged gunman who shot Hussle and two other men on Sunday afternoon in front of the rapper’s clothing store in south Los Angeles.Prior to his arrest, Moore described Holder as “a man who is a substantial risk to public safety and willing to use violence.”Moore said that while Holder is believed to be in a gang and that Hussle was also involved in gangs as a youngster growing up in Los Angeles, the slaying stemmed more from a personal dispute between the two men.”It appears to be a personal matter between the two of them,” said Moore, who declined to detail the specifics of the discord between the two men.He said security cameras from nearby businesses captured the shooting as it unfolded around 3:20 p.m. on Sunday.The chief said witnesses told investigators that Holder and Hussle, 33, who was born Ermias Asghedom and raised in the neighborhood he was killed in, got into an argument in front of his clothing store, The Marathon. He said Holder left the store, but later returned with a handgun and opened fire on Hussle and two other men, who have not been identified.Hussle was hit multiple times, including shots to the head and torso, according to the Los Angeles County medical examiner’s office.Moore said Holder ran from the scene and got into a 2016 white Chevrolet Cruze driven by an unidentified woman and sped away. He said police found the vehicle abandoned nearby.”We want the public to help us identify and apprehend Mr. Holder,” Moore said. “Armed with a handgun, this senseless murder, this expression of violence represents that this is a man who is a substantial risk to public safety and willing to use violence and we want to see that stopped.””I ask him to surrender, to find a local law enforcement agency, to go to a station and surrender and to defend himself as he feels appropriate, but to stop this from continuing,” Moore said.The rapper was rushed to a local hospital, where he later died. A second gunshot victim was taken to a hospital and was listed in stable condition, and a third man was wounded but refused medical attention, police said.Witnesses and people in the area have been posting names and pictures on social media, which helped LAPD investigators narrow the list of possible suspects down to one, sources with knowledge of the investigation told ABC News on Monday.A couple of hours before he died, Hussle tweeted, “Having strong enemies is a blessing.”Hussle acknowledged his affiliation with the Rollin 60s Neighborhood Crips, one of Los Angeles’ biggest and most notorious street gangs, in a 2010 interview with Complex magazine, but he was also working with authorities to help end gang violence.The rapper was scheduled to meet with LAPD Commissioner Steve Soboroff and Chief Moore to “talk about ways he could help stop gang violence and help us help kids.”Soboroff read an email he received from Hussle on Feb. 26, asking him to set up a meeting with Moore.”Our goal is to work with the department to help improve communication, relationships and work towards changing the culture and dialogue between LAPD and the the inner city. We want to hear about your new programs and your goals for the department, as well as how we can help stop gang violence and help you help kids,” Hussle wrote in the email, according to Soboroff.Soboroff said the meeting will be held at a later date with members of Hussle’s family and representatives of Roc Nation, the entertainment company founded by rapper Jay-Z.While the shooting is apparently not directly linked to gang violence, it came during a surge in gang shootings in the south Los Angeles area. In the past week there have been 11 homicides in the area and 26 other shootings, most of them stemming from gang violence, Moore said.Los Angeles Mayor Eric Garcetti lamented the killing of Hussle, calling him “an artist who touched our city and the lives far beyond the City of Angels.”Garcetti said his office had previously worked with Hussle on an initiative to get more African Americans involved in the tech industry and support businesses of people who have previously been on the wrong side of the justice system.”He was somebody who was a gifted and brilliant artist, an entrepreneur who found global success, who was working closely with this city to help save lives and transform lives even as he was doing that for himself,” said Garcetti, adding that Hussle’s “impact to our city was deep.”Copyright © 2019, ABC Radio. All rights reserved.