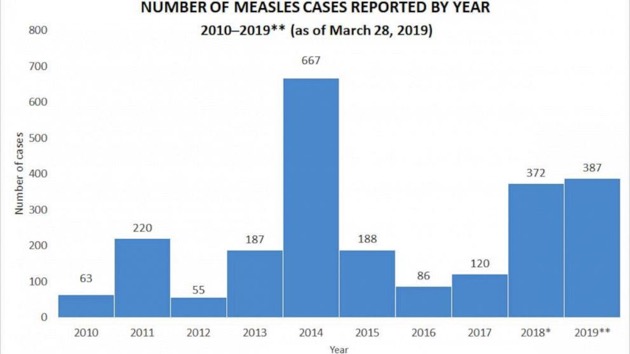 Centers for Disease Control and Prevention
Posted on April 2, 2019 by ABC News

(ATLANTA) — The number of measles cases so far this year is more than all the cases reported in 2018, according to new data.The Centers for Disease Control reported Monday there had been 387 measles cases between Jan. 1 and March 28, 2019.By comparison, in all of 2018, there were 372 confirmed measles cases in the U.S.The first quarter of this year and all of last year are on the higher end for the past decade, though the year with the most cases came in 2014, when there were 667 cases over the course of the year, according to CDC data.The numbers of measles cases in 2014 and, now, 2019 are the highest since measles was eliminated in the United States in 2000.The disease being “eliminated” meant there were no transmissions of measles for more than a year, and the CDC’s website says the 2000 elimination “was thanks to a highly effective vaccination program in the United States, as well as better measles control in the Americas region.”Vaccinations for measles and other contagious diseases like mumps have come under fire in recent years as individuals who decide not to get vaccinated or vaccinate their children — in the face of scientific evidence — are lowering local and national rates.Experts explain that the problem with some people opting out of vaccinations is that those lower numbers impact herd immunity, which refers to the protection of an entire community when immunity rates are sufficiently high. When this occurs, the likelihood of someone with a disease encountering someone non-immune is negligible, preventing the disease from spreading through the population.While much attention has been paid to outbreaks in Washington state and parts of New York, those are only two of the 15 states with confirmed cases this year.The other 13 states with cases of measles in the first three months of 2019 are Arizona, California, Colorado, Connecticut, Georgia, Illinois, Kentucky, Michigan, Missouri, New Hampshire, New Jersey, Oregon and Texas.