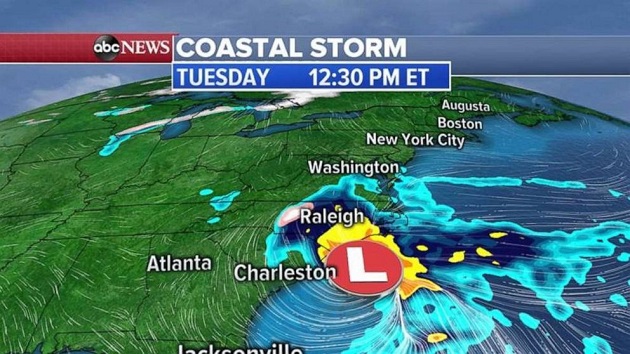 (NEW YORK) — As much of the Midwest braces for more rain that could exacerbate existing flooding, a coastal storm is targeting the Southeast Tuesday as a storm out West pounds the coast.Although rain is in the forecast Tuesday along the East Coast, the strongest part of that storm likely will remain over the Atlantic Ocean.By Tuesday night, the mid-Atlantic should still see some heavy rain and gusty winds from Virginia up to Long Island, New York. By Wednesady, the storm will intensify but mostly remain out to sea, brushing eastern New England with a bit of rain or wet snow.That system shouldn’t deliver a lot of snow in the Northeast, mostly just a dusting of perhaps as much as 2 inches in parts of New England.Meanwhile out West, rain is slashing window panes from Washington to California and the Sierra Nevada may see a foot of snow. The western storm also is forecast to produce gusts of up to 50 mph from southern California into Las Vegas and northern Arizona.The western storm, by late afternoon or evening on Wednesday, will be moving out to the Plains, which may see severe weather, especially in the southern Plains and other areas still coping with massive flooding. Hail and gusty winds also remain a distinct possibility.That system will move farther east on Thursday, delivering severe weather to the Deep South and Gulf Coast, areas that could see damaging winds, hail or potentially isolated tornadoes.